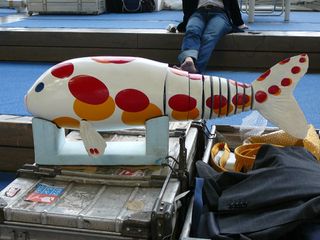 Underwater robots are, by definition, bound to be different.

Robot Watch has a colourful photo report on one of the more unusual robotics events we've heard of - the Underwater Robot Convention 2007 [PDF], which was held in Tokyo's Tatsumi International Swimming Center earlier this month.

The convention, which regularly moves around Japan, is about both showcasing the latest technology and introducing robots to schoolchildren. As well as getting to see some of the more bizarre automata they're ever likely to set eyes on, kids also had a chance to design their own underwater machines in a drawing competition.

Highlights of the show were a giant carp robot, a sea snake and an eel with a giant red head, which could propel itself at almost half a metre per second. Don't miss the video of the robotic eel in action right here [WMV].