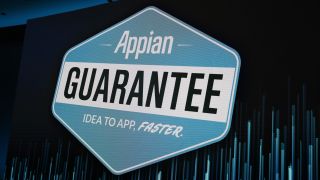 These days every business has an app but developing custom applications can quickly become quite costly for organizations. This is where low-code comes into play. Instead of hiring costly developers, businesses can simply configure how they want their app to function and the low-code platform does the rest. This gives them more time and resources to dedicate to the other parts of their business while speeding up the development process significantly.

TechRadar Pro attended this year’s Appian World where we sat down with the company’s Director of Product Strategy Jorge Sanchez to learn more about low-code and how businesses can leverage this emerging technology.

Can you tell us a little about your responsibilities as Appian’s Director of Product Strategy?

Certainly, so I started in the role of director of product strategy at the end of 2014. Director of product strategy really has different pillars so to speak. There's comp intel, analyst relations, thought leadership and R&D. My biggest focus is on R&D and prototyping and leveraging technologies. I've also been heavily involved in positioning the platform through thought leadership and all of these types of events.

But what I really like about it is that the opportunity to kind of play around with new technology. So we were the first ones to do things like really take a look at artificial intelligence before it was like all the hype like back in 2015 and 2016. We started prototyping figuring out how we can incorporate this technology into our platform and how can we tell our partners and customers what are they doing. And then usually when we analyze that technology like we did the same four block chain within the same for you know whether you're training your own models or using pre-trained ones. What is the best approach? Can we incorporate it? Should we have just an integration through the app store, should we do a partnership?

Based on that, we kind of proof the concept, make a decision and then hopefully shape up how that's going to impact our roadmap. Within analyst relations, we have all the relationships with the Forresters and Gartners of the world and try to help understand the markets that we're going in to while positioning ourselves well in those markets.

You’ve been part of the organization since 2006 when you started as a software developer. How have things changed since then and what hurdles has the company had to overcome?

Well a lot has changed. Back then I remember it was we were coming out of Appian three going into Appian four. We were full on business process management and it was interesting as I saw firsthand the evolution. We were the first to go to the cloud and we were going into the cloud before anyone else. We were the first to do things like for example starting focusing not just on business process but also learning about the importance of integrations reports. So we kind of flew out of the niche or the the box that was business process management (BPM) and turned more into a platform to build apps and within that time we went from something like 80-100 employees, when I joined, to over a thousand globally now. So we've really seen an explosion but we've also learned a lot.

We've had a number of different challenges and successes that have helped shape the evolution of the platform so to speak. So a lot of it kind of organically happened. We were doing a lot of BPM and customers would say hey why don’t we do this. I love how I can draw on executable process but I also want us spend more time in the UI so we come up with drag and drop UI. Reports are also important so we start all of that you know to make sure that we can connect to all of these systems and then naturally we evolved into all of these other things like case management, Mobile, etc. We were the first to mobile in our space as well. So yeah it's been very interesting to see the evolution of the platform and the solution as we go along.

What are the benefits of low-code from a business perspective?

So I believe that the main challenge companies are seeing is the demand for software developers and the demand for people. Seven figure salaries for good developers are becoming kind of a big deterrent too for organizations to be able to keep up with the advancements that they need to have or just keep up with the apps they need to start creating.

So low code was born out of the necessity to respond to that demand. So the way I see it there's two people that benefit from it. The companies benefit because they can do more with the technical resources they already have and can build applications by drag drop configuration. However, in the hands of a developer, a low code tool can make that person become that much more productive.

How has low-code helped businesses on their digital transformation journeys?

Digital transformation it's essentially a kind of a concept centered around adopting the latest technologies. Low code removes some of the obstacles and impedance needed to get started. It's not just about the speed with which you can develop it’s all of those frictions that you no longer have to worry about.

Of course there's an element of trust because you have to trust the platform that you build these applications on and that's where a lot of the certifications and all of those the investments that we've done there are coming from. I believe the value comes from the ability for companies to hit the ground running, get started really quickly and build something that is based on the way that they want to run the business because that's the other part. It's not just about buying a premade solution because that that forces you to adapt to the way they think the organization should run things. So the reason people invest in custom code or custom applications is because they want the app to represent the way they do business because oftentimes that is their differentiator.

So with low-code you get to do that without all the constraints and difficulties and you know initial approval and overhead of custom code. So I think that are a couple of the big drives and we have customers that are huge and do build custom code but it just makes sense to build a lot of these applications in low code instead.

What advice would you give to businesses looking to implement AI for the first time?

So the biggest advice I would give them is twofold. First understand that you do not need to be an expert on AI and on how it works and how it does what it does. The biggest thing you need to do and understand is what is the value that I can get out of AI.

So just like with any new initiative it's not about AI for the sake of AI. If you have an opportunity, have a process with end steps and you find an opportunity to automate one of them. You do not need to rethink or restart from scratch. You can say hey this step in the process, let's call it something around document management, can be fully automated with AI because I know that there is a service that can take that document, extract information, put some structure around it and they can move on the next step much faster without human intervention. So the person that came up with that idea does not need to know how OCR technology works. They just need to know that it exists. It is easy to integrate and that in this particular case it is going to bring them value.

To summarize, just like anything else be aware of what's out there. Don't be intimidated by the thought or idea that you need to become an expert on it. The only thing you need is to understand what it does, what it can do for you and what you need to get started and you'll be surprised to know that many providers out there are making that very very easy. That’s why we announced that we’re adding Google’s AI services to our platform.

What do you think the future holds for low-code and could it one day surpass traditional coding?

I believe so. I mean if you look at some of the more advanced articles on A.I. and some of the things being developed now, A.I. is not necessarily a replacement for a specific job and it may automate parts of it. So if you look at the whole software development lifecycle it might not replace part of the creative process, it may not replace coming up with innovative ideas but it might replace the way we test. You saw today some examples of oh here's the data that I have and we create the interface for you automatically.

So I think A.I. and low code platforms can definitely make that a lot easier and faster. And what that means just like every time there's a revolution in the way we automate things. It means that the job or the responsibilities of humans become more specialized. So from one point you're like okay we no longer have to do the repetitive or mundane tasks. On the other side it gives you the opportunity to focus on what matters.

Like I said you know the platform helps you with the security, the UI, the endpoints and all of it. So you can focus on what the app does. The same thing with software development. You're gonna be able to focus on how. Like what is the best way for me to solve this business problem. And a lot of the other things that you know when you're building a prototype that's the MacGyver style where you just go and build it and there. But then when you want to get to the production stage, it's localization, internationalization, testing, regression, tect. I think a lot of that is going to might be automated in the future so we can focus on the fun part. That's the way I see it. But of course education is important, being aware of what's out there is important and mapping it to a value not using it for the sake of just using it is key.