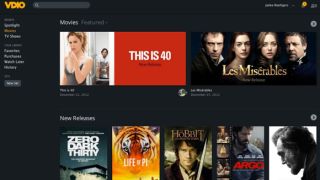 Vdio has content from most major studios and networks

Update: "This summer" availability apparently meant June 19, as now everyone, Rdio Unlimited subscribers or not, can use Vdio.

"[S]tarting today, you don't have to be an Rdio listener to buy, rent, and share your favorite moves and shows with friends," wrote the Rdio team in a blog.

Vdio is still only available in the U.S. and U.K., and expectant users can hurry to the service's website or download the iPad app.

The Rdio streaming music service that launched in 2010 has been joined by a related pay-per-video video service known appropriately as Vdio.

Unlike Rdio, though, Vdio has more in common with iTunes' video on demand model than it does with Netflix; Vdio is pay-as-you-watch, allowing users to "rent" movies and TV shows from major studios.

Rdio, on the other hand, is a subscription-based service (like Spotify).

The new VOD service is currently available in the U.S. and U.K., but there's a catch: only paying Rdio Unlimited subscribers can access it.

Currently Vdio is only available to customers who are already paying for Rdio subscriptions. Those subscribers get $25 of Vdio credit to promote the launch of the new service.

Anyone else is currently out of luck, though Rdio Vice President of Product Malthe Sigurdsson told GigaOM that that will change this summer.

Sigurdsson also reportedly revealed plans to expand to Canada "in the coming months."

Vdio has a few unique features to differentiate itself from competing streaming video services.

Chief among those are Vdio's social features, which are closely tied to Rdio and allow users to follow their friends and see recommendations based on their tastes.

Sigurdsson stressed to GigaOM that basing the service on users' personal networks "rather than a marketing department" is a major plus.

Content from major studios and networks including Disney, Fox, Warner Bros., Universal, NBC, CBS, ABC, Comedy Central, Showtime and the BBC can be streamed over the web and an iPad app (though unfortunately you can't purchase anything through the app itself).

Rdio is already available on a number of platforms, though, and Vdio could hypothetically expand outward to Android, Roku and other connected devices too.

Sigurdsson also teased that Vdio subscriptions could be added in the future, according to the report.