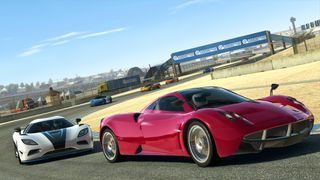 Melbourne-based mobile developers FireMonkeys has lifted the hood on the third instalment of its massively successful mobile game, Real Racing, with an Australian iOS launch last night to be followed by an international iOS and Android launch on February 28.

The game launched on the Australian, New Zealand, South African and Russion iOS App stores at 12:01am, and is the first Real Racing game to offer licensed tracks, including Mount Panorama, Mazda Raceway Laguna Seca, Indianapolis Motor Speedway, and Silverstone courses, among others.

Real Racing 3 is also the first game in the series to be free, with in-app purchases offering gamers the chance to increase their virtual bank balance to upgrade and repair cars without having to wait.

The developers at FireMonkeys have put a lot of time and effort expanding on Real Racing 2 for the third installment. There are 46 cars available at launch (up from 30), over 900 events (up from 70) and a race grid of 22 vehicles (up from 16), all before the team begins to release DLC.

The Australian developer has leveraged its publisher EA's relationships to expand the number of manufacturers as well, with cars from Porsche, Dodge and Audi added for the first time.

What's more, the company has refined its multiplayer experience, allowing for Android and iOS gamers to compete against each other thanks to the development of Time Shifted Multiplayer, or TSM.

By logging in to the game with a Facebook account, gamers will be able to compete against friends regardless of platform. It works by recording a player's race, and then using that time and performance as a competitor within any friend's race.

That performance can then be influenced by competitors, including damage from being crashed into or being beaten by a new player.

For non Facebook users, the iOS version of the game will also offer TSM through Game Center, although there is no real time multiplayer on offer.