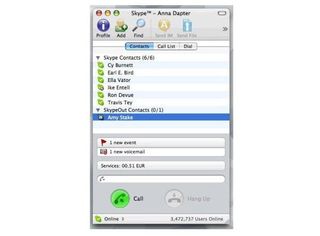 Skype has introduced new pricing structures and a subscription package

Skype has released price details of its new SkypeOut cost structure. We first learned that Skype was to release a new structure for SkypeOut calling on 19 December, but precise details have remained under wraps until now.

Skype says its new structure is "the latest in a series of new steps Skype is taking to give consumers a choice of easy-to-understand, value-based Internet communications packages".

Skype's connection fee rate is now 0.039 Euros excluding VAT. Skype's previously announced Talk for Britain campaign in the UK does not include a connection fee for national calls.

There will be a premium subscription package (Skype Pro), which removes per-minute charges when using SkypeOut for landline calls. Instead, there is a small connection fee.

There is also a reduction in global dialling rates to 0.017 Euros per minute for calls to the Czech Republic, Guam, Hungary, Israel, Luxembourg, Malaysia, Puerto Rico, Alaska and Hawaii.

The new pricing is effective in Europe immediately, before rolling out worldwide later in the year.