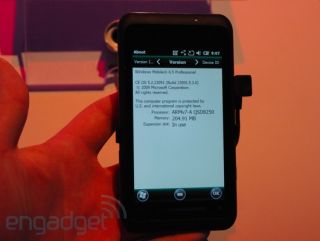 Microsoft's long-awaited finger-friendly upgrade to Windows Mobile may have arrived, if shots taken at CES are to be believed.

The new OS, shown off on the Toshiba TG01, has a much more finger-friendly button system at the bottom, rather than the inexplicable tiny menu words.

It's still the same ugly-looking interface, with tiny icons and hard to press sections, but Engadget reports that a stylus is less relied upon than before.

The new Windows Mobile 6.5.3 upgrade hasn't been given a roll out date to other phones yet, which makes sense if Microsoft is keeping it hush-hush.

But given that Windows Mobile 7 is supposed to be making its hands-on debut at Mobile World Congress next month, we're interested to see that Ballmer's Brigade are still trying to keep things fresh on the incumbent - stay tuned for more information when we get it.