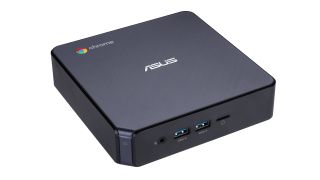 Asus has revealed its new Chromebox 3 device, which is a ChromeOS-powered compact PC that comes in a range of hardware configurations.

These range from Celeron 3865U processors, 4GB of RAM and 32GB storage all the way up to a Core i7 8550U CPU, 16GB RAM and 256GB SSD. For a device running Google’s lightweight ChromeOS, those are some seriously speedy specifications.

Chromebox devices are compact desktop devices, and while they aren't as popular as their Chromebook siblings, which are laptop-like devices,  they have proved popular in businesses and academic institutions, thanks to their small size and relative affordability compared to Windows and Mac devices.

However, ChromeOS now has access to the Google Play store, which allows people to download and run Android apps on a Chromebox or Chromebook. This could really be a game changer, as it drastically expands the potential of ChromeOS products, giving them access to thousands of games, media and productivity apps.

At an event we attended that was co-hosted by Asus and Google, we were shown how this can make the Asus Chromebox 3 a seriously handy mini PC.

ChromeOS has been improved to work even more like a desktop operating system like Windows 10. Apps can be run in resizable windows that can be moved around and positioned on a desktop, and two windows can run live apps at once side-by-side.

With ChromeOS being such an internet-dependant operating system, it means new updates to the OS are downloaded and installed automatically, so you’re always running the most recent update. It’s also incredibly secure thanks to Google’s antivirus protection, as well as the fact that the OS is rarely targeted by malware, compared to Windows.

While many ChromeOS apps still need an internet connection, the majority of Android apps do not, making the Chromebox 3, and Chromebooks in general, much better offline devices.

As our list of the best Android apps shows, there are a huge number of apps from major companies available. When using them on the Asus Chromebox 3, most apps will easily adapt their touchscreen controls for mouse and keyboard commands.

However, most impressively, many apps are being redesigned to work with ChromeOS to make use of keyboard shortcuts and the larger screen size. This includes Microsoft’s Office apps for Android, making the ChromeOS a formidable productivity tool.

As well as USB Type-C, it comes with five other USB ports and a LAN port, and is available to pre-order now. We should be getting one in soon for a full review.