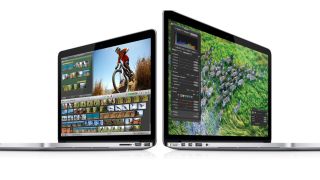 In keeping with its tiny theme Tuesday, Apple announced the arrival of an all-new MacBook Pro with Retina display, this time a 13-inch iteration.

The new laptop comes just months after a 15-inch MacBook Pro with Retina display wowed with a screen jammed with more than 5.1 million pixels.

We've heralded the 15-inch version's display as "spectacular," and the 13-inch model appears to fall right in line.

With a resolution of 2,560 x 1,600, the 13-inch has a resolution boost of over four times over the previous 13-inch and the second-highest resolution computer - after the 15-inch Retina.

Ready for the Retina

The device is 20 percent thinner than its previous iteration, Schiller shared.

Its resolution also gives it two times the resolution of a 1080p display and a 29 percent higher contrast ratio over the previous Pro.