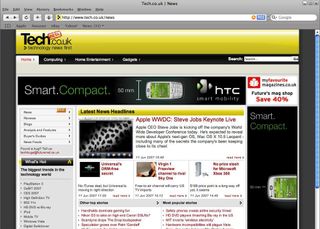 By releasing a Windows-based version, Apple is looking to boost use of its own web browser. It hopes that more website developers will develop websites that work with Safari.

Apple claims Safari for Windows is the fastest web browser available for PC users. The company says it loads web pages up to twice as fast as Internet Explorer 7 , and up to 1.6 times faster than Firefox 2 .

Yesterday, Apple updated the Safari for Windows beta to version 3.0.1 . The new version patches some of the security flaws that were discovered in the software soon after launch.

We've also carried out a full test of the new browser and found some startling revelations. Read on...