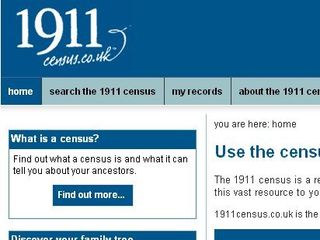 The release of the 1911 census has sparked massive interest online – with reports of more than quarter of a million searches within the first 10 hours of launch.

The 1911 census is the latest to be published, allowing thousands of people to look in depth at the survey results from their ancestors.

Of course, the nosier among you can also look up famous people's family histories, with David Beckham apparently descended from a scavenger and Kate Moss having fashion in her genes (jeans?) courtesy of a dress making family member.

Woolf at the door?

The census details 36 million people in England and Wales, including the likes of King George V, Virginia Woolf and then-PM Herbert Asquith.

More than 260,000 searches were made in the first 10 hours from the midnight launch, although only 80 per cent of the records are currently available online, with the rest to follow.

Eighty percent of the available records from England have been uploaded and the rest will go online in coming months.