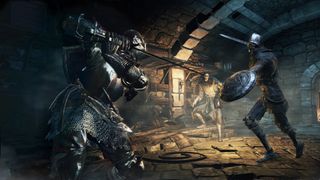 It's official: Reddit user GMABT is too good at Dark Souls.

After beating the game with a Rock Band controller, a drumset and the bongo that came with Donkey Konga on GameCube, he's managed to beat the game using only his voice and straight willpower.

"This run was suggested to me many times and I never knew if it would be possible, but after someone showed me a program that did the hard work of voice recognition for me I had to give it a shot ... For the most part the detection was good, but the latency was around 1.5 seconds, and commands couldn't be chained together quickly," GMABT, who also goes by the name bearzly on Twitch, said in a post on Reddit.

To paint a picture of how intense it got, here's a video of GMABT fighting two of the game's toughest enemies, Dragon Slayer Ornstein & Executioner Smough: