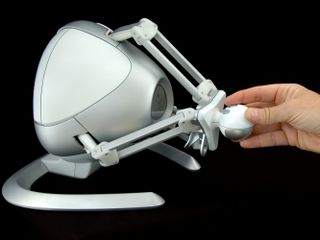 Slipping under the radar at CES this year was not a hard thing to do, what with many big launches and Apple launching the iPhone at MacWorld.

What you might not have read is that Novint Technologies has launched its award-winning Novint Falcon games controller.

Like nothing else we've ever seen, the Falcon is - to quote Novint - a "high-fidelity, three dimensional interactive touch device for the home PC."

It allows gamers to feel weight, shape, texture and force effects when playing compatible games. Not only can the controller resist your manipulations, it will also push back at you if the game tells it to.

It's hard to say whether this is going to catch on. It's certainly a wacky piece of hardware which looks the part. But the key will be whether it'll be easy to use for long gaming sessions. The $190 (£95) asking price is also bound to be a sticking point.