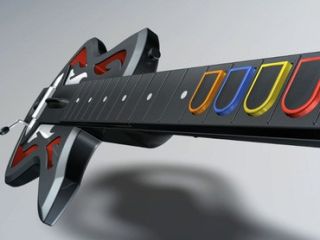 New Guitar Hero peripherals are fully customisable, with a renewed focus on heavy metal in the latest game

Activision's revealed its latest Guitar Hero peripherals for the forthcoming metal-fest that is Guitar Hero: Warriors of Rock which is set to feature an all-new, transformable guitar controller.

Gamers will be able to customise their new axe with a range of separate body parts which they can add to the standalone neck and fret board.

The new controller is set to be available for the Xbox 360, PS3 and Wii versions of the game.

Activision reps at a recent pre-E3 event assured TechRadar that older Guitar Hero peripherals will still be fully compatible with the new game.

Activision is sure to release more details on Guitar Hero: Warriors of Rock pricing and availability at E3 later in June.

Warriors of Rock features a storyline narrated by Kiss's Gene Simmons, a new range of character powers and over 90 new tracks.