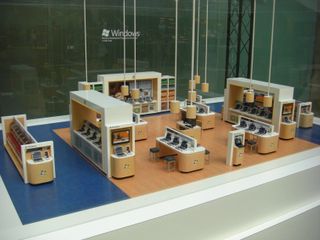 Microsoft's first shop will open in the coming week, to coincide with the arrival of Windows 7.

The store will open its doors on October 22 in Fashion Square Mall in Scottsdale, Arizona – which is not right next door to an Apple store, despite some early rabble-raising by Microsoft.

Microsoft's shop will sell the whole gamut of Microsoft products, from phones through to the software that has made the company the world's most recognisable.

The store will also offer demonstrations and allow people to try out products, in much the same way as Apple stores do across the planet.

"It's very important for us to have a direct connection with the user."

There is no word as yet on when Microsoft stores will make it across the pond, but you can expect that Oxford Street or Regent Street in London to be the most likely locations.

Apple's showcase UK store is on Regent Street, and the shop has already been the focal point of some of the company's key product launches in Britain.