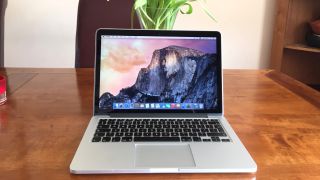 In addition to its partnership with Apple to build enterprise apps for iOS devices, IBM could also be making a big leap and make a significant switch to Macs internally.

The former Apple rival was said to adopt as many as 50,000 MacBooks for employee use by the end of 2015, but that number could be much higher. If accurate, and if plans pan out, up to 75% of IBM employees could make the switch from Lenovo-branded ThinkPad notebooks to MacBook laptops.

"I'd like to be able to offer these to everyone that can use it," Smith said during the videotaped interview. "We've got to find a way to make the overall cost the same or lower than PCs to make that happen."

According to Smith, Apple said that its largest corporate customer orders 25,000 MacBooks a year. Smith said that he told Apple that IBM alone could consume 150,000 to 200,000 Macs annually, or up to eight times the number of MacBooks Apple sells to its biggest enterprise client currently.

The adoption of 200,000 MacBooks is also four times the initial number that was leaked from an internal IBM memo.

In another segment of the interview, Smith said that he had spoken with Apple CEO Tim Cook of the potential switch, noting that between 50% to 75% of IBM employees could ditch their ThinkPads for MacBooks.

We've reached out to IBM for comment on Smith's interview, and we'll update the post when we hear back.

Walking away from a legacy

If these plans play out, IBM would be walking away from systems that it had once built to compete against Apple's computers. In 2005, IBM shed its hardware business and sold its ThinkPad and PC business to Lenovo.

Most recently, Apple and IBM laid the past to rest and began collaborating on enterprise apps. IBM committed to building 100 enterprise apps as part of the partnership, and the companies are working together on HealthKit and ResearchKit data. Apple benefits as it's able to push more of its hardware to enterprise users, and IBM gets to promote its cloud, analytics and business services.