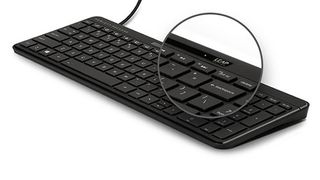 HP is getting serious about Leap Motion

Users curious to try Leap Motion's touchless and tapless control interface will soon find its fingers, so to speak, in many more products.

Leap Motion's digit-waggling technology was originally integrated with the HP Envy 17 notebook, but now the tech will come built in a

. The keyboard will be compatible with a number of HP computers pre-installed with Leap's software.

Once connected, the keyboard will allow users to control eight HP desktop all-in-ones and three new desktop PCs with a wisp of their hand. The extra control isn't coming to all computers, but those who bought the following US models will be in luck.

The motion-control-PC curious crowd won't find themselves waving their hands over their keyboards just for kicks. HP's also made sure to pre-install a few free apps to demo the gesture controls. Users will be able to access Airspace, Leap Motion's own app store, for a (hopefully) expanding number of applications.

In the grand scheme this will help push Leap Motion's integration with devices and differentiate HP computers in the vast sea of mass producers like Dell and spec to build OEMs such as iBuyPower and Origin Gaming.

Leap Motion, meanwhile, seems to have even bigger plans down the line. Besides HP computers, you can also buy the standalone Leap Motion device that's no bigger than a jumbo sized USB drive for $80 (about £48, AU$87) to add motion control to other non-HP computers and even Macs.

"But we're just getting started. In the future, motion control will become a part of everyday life," the company wrote in a blog post. "[W]ith motion-control technology embedded in a wide variety of devices – including tablets, smartphones, interactive kiosks and head-mounted displays."