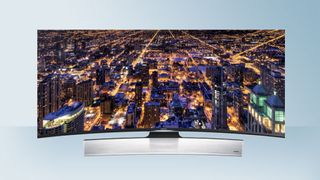 One of the world's largest display panel manufacturers has demoed a series of 4K curved LCD displays which may pave the way for a new generation of premium business displays. Hold your horses, though, as it's likely that monitors featuring the technology won't see the light of day for at least a few years.

AU Optronics showcased a number of 42- to 65-inch UHD 4K curved panels with narrow bezels and what it calls "near-panoramic images." Of particular interest is the 42-inch model which has the same diagonal size and pixel count as four full-HD 21-inch monitors arranged in a 2-by-2 matrix.

Monitors based on this particular panel would be useful in business sectors like content creation, financial, utilities, image processing and medical imagery where the ability to cram as many pixels as possible in a panel is vital.

Its resolution of 3840 x 2160 pixels means that users have the opportunity to view significantly more data onscreen without having to scroll.