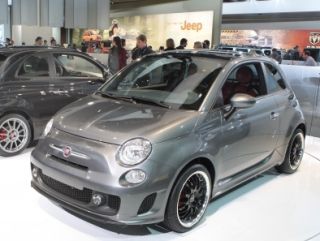 Fiat unveiled a concept version of its iconic and award-winning 500 city car at this month's 2010 Detroit International Motor Show.

No word yet on if and when we might see a final commercial release of the Fiat 500 BEV, although it has immediately become one of the most desirable electronic cars on our want list. (Largely because we imagine we might even be able to afford it!).

Fiat HQ in Turin has not issued any details on specs on the Fiat 500 BEV, beyond saying that it is a concept model right now.

However, Wired's Chuck Squatriglia confirmed that, "this isn't some slick shell on a tube frame" and that "there's a real motor under the hood, a real battery under the floor and all the interior bits you'd expect of a production car. We're not sure why, but it's even got five-point racing harnesses. Seriously."

Hopefully we should hear more from Fiat on the electric 500 at some point very soon.