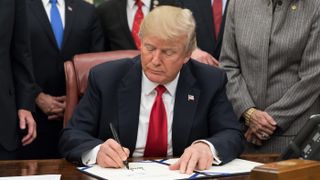 The US commander-in-chief tweeted that Apple was refusing to unlock iPhones "used by killers, drug dealers and other violent criminal elements".

"They will have to step up to the plate and help out great Country, NOW!" the tweet added.

We are helping Apple all of the time on TRADE and so many other issues, and yet they refuse to unlock phones used by killers, drug dealers and other violent criminal elements. They will have to step up to the plate and help our great Country, NOW! MAKE AMERICA GREAT AGAIN.January 14, 2020

The news follows a statement earlier this week from US Attorney General William Barr that accused Apple of not being helpful in an inquiry into a shooting that is being treated as a terrorist act.

Barr said that Apple had not provided "substantive assistance" to unlock two iPhones connected to an investigation into the fatal shooting of three US sailors at a naval base in Florida last year.

Apple rejected the claim that it had failed to assist officials in their investigation, noting that it had responded to seven separate legal requests from federal investigators following the shooting.

This included handing over “many gigabytes” of data to the authorities, with iCloud backups, account information and transactional data for multiple accounts all passed over

"Our responses to their many requests since the attack have been timely, thorough and are ongoing," it said in a statement.

Apple has peviously said it is unable to access data on any device that is encrypted with a passcode without building a specific "backdoor tool". Earlier this week, Microsoft CEO Satya Nadella criticised the increasing use of backdoors in the technology industry, which undermine the privacy of users across the world.

The US government and Apple have clashed several times in the past, most notably following a mass shooting that saw 14 people killed in San Bernardino, California, where the company Apple refused to help authorities gain access to the gunman's iPhone.