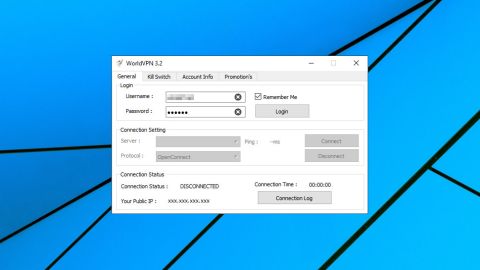 WorldVPN's reseller plans look amazingly cheap, but the core service is poor: sluggish speeds, no transparency, and the massive technical incompetence shown in the Windows app.

WorldVPN is a small provider who claims to offer an 'enterprise VPN' from as little as $1.12 a month over three years.

'Enterprise' is a serious exaggeration, but the company's 200+ locations across 30+ countries isn't bad. P2P is supported on some servers, too.

The apps are very basic (more on that later), but WorldVPN has its own downloads available for Windows, Android and Mac, and recommends Cisco AnyConnect for iOS devices.

The company scores zero for transparency, with no details on who owns it or where it's based, no terms and conditions page, and a 'no logging' promise with absolutely no details to back it up.

Support is unimpressive with only 22 articles in a tiny web knowledgebase, a 'News' page which hasn't been updated in more than three years, no live chat, and a ticket system with no details on the response time you can expect.

WorldVPN's appeal is mostly based on price. Okay, pretty much entirely, but when you look at the details, it's hard not to be tempted.

The 'One User' plan supports only a single connection, for instance, but it's yours for $1.99 billed monthly. Yes, that's real 'monthly billing', not 'the equivalent if you pay for three years up-front.' Opt for the annual plan and this drops to $1.58.

The Unlimited plan - which, despite the name, only supports five simultaneous connections - is a reasonable $6.95 billed monthly, $3.50 over a year.

Dedicated IPs get you a fresh IP address for your usage alone, which should make it easier to bypass VPN blocking and get into sites like Netflix. These are priced from $10 a month in the US, and you can choose multiple other locations around the world for a little more: UK, Sweden, Russia, Japan, India and more cost $13 a month; Taiwan, Malaysia and Hong Kong cost $18 a month, and so on.

WorldVPN also has a Reseller scheme which could work for regular users, too.

For example, a one-off $100 gets you 100 months of use across as many plans as you need, each one supporting up to three simultaneous connections. You could use it for yourself in a single block, in which case you're covered for more than eight years. You could share it with family or across a business, enabling everyone to get connected. And if someone only needs a VPN occasionally - three months a year to watch a particular show on Netflix, say - then you only need allocate them three months from your total, which may save you even more cash.

WorldVPN's service looks extremely basic, then, but at least it's priced to match, and there's certainly a lot of flexibility here.

WorldVPN has a lot of plans, as we've seen, but its pricing page highlights the key differences and makes it easy to find what you need.

The company does hide one detail on the purchase page, and it's easy to see why. Although WorldVPN supports many payments methods, everything but Bitcoin has a processing fee: 3% for Perfect Money, 5% plus $0.95 for cards or PayPal, and 5% for WebMoney, QIWI, MOLPay, AdvCash and Yandex Money.

If you're paying annually, though, it's not such a big deal, and overall WorldVPN remains significantly cheaper than most of the competition.

Whatever plan or subscription length you decide you need, the payment process is straightforward, and a few minutes after we'd made our choice, WorldVPN sent us an email with account credentials and links to various setup tutorials.

Some VPN apps focus on ease of use, others on power, but WorldVPN manages to fail in both areas: it looks complicated and intimidating, yet has barely any features at all.

The text-heavy tabbed interface wastes screen real estate, for example by having a login area on the main dashboard. There's no need to see your username and password once you've logged in.

The app doesn't have an 'Automatic' option to choose the fastest server for you, forcing you to manually choose your preferred location each time. (There's no Favorites system or Recent Servers list to speed this up.)

There are bugs so absurdly obvious that we're amazed they've not been caught. For example, by default the Server list initially displays a 'Select Server Location' prompt. Plainly you shouldn't be able to click Connect until you've actually chosen a server, right? But you can. And when we tried it, the app didn't even display an error, but just crashed.

An 'Account Info' page includes an 'Expirity Date' value which was 1970-01-01 for us, presumably because we were using a trial and it didn't have one. Not a major issue in itself, but it shows the developer isn't doing a good job of handling unusual situations, and that might lead to far more serious problems elsewhere.

Protocol support is limited to OpenConnect, OpenVPN UDP and OpenVPN TCP. There's no support for L2TP, IKEv2 or any native Windows protocols.

The only significant feature is the kill switch. It's application-based rather than system-wide, forcing you to create and maintain a list of applications that should be forcibly closed if the VPN drops. It's better than nothing, but only just.

The most basic and fundamental function of any VPN app is to connect you to a server, so there's no way WorldVPN could mess that up, right?

The Windows app only supports three protocols - OpenConnect, OpenVPN UDP and OpenVPN TCP - and the first not only didn't connect, but it didn't give us any explanation of why.

We moved to OpenVPN UDP, a much more commonly supported protocol which we fully expected to deliver. But the app barely even tried to get online: we clicked Connect, the status switched to Connecting, but was back at Disconnected within a fraction of a second.

Anyone can have a temporary connection issue, but this was more fundamental. When we checked the OpenVPN configuration file the app was using, it turned out to be HTML from a page on the WorldVPN site. OpenVPN didn't try to connect because it doesn't understand HTML - this couldn't possibly ever work. And yet, somehow, the company had failed to notice.

We switched to OpenVPN TCP, and this time the app created a valid configuration file. We clicked Connect, and then watched as the app hung on a connection status of 'Connecting.'

Browsing the log, we found WorldVPN had actually connected, and given us a new IP address we could use. Unfortunately, the app didn't seem to realize.

The app generally displays no notifications to tell you when it connects or disconnects, either. The only way we could find out for sure was to check our IP address online (type 'what is my ip' at Google.)

In one scary exception, when connecting to a UK server the client warned us 'You are connecting for the first time to this peer. You have no guarantee that the server is the computer you think it is', and asked us to confirm that the certificate information was legitimate.

There's no way that most users will be qualified to make that decision, but scrolling through the data showed it looked a little suspect (the certificate was allocated to a company name of 'My Company' and an organization name of 'My Organization.') This wasn't filling us with confidence that WorldVPN had configured its servers correctly.

We terminated the OpenVPN.exe process to forcibly close the connection, and the app immediately noticed and changed its status to Disconnected. That's good, but without notifications, you'll only realize if you're looking at the app interface.

We configured the kill switch to close Chrome if the VPN dropped, and tried connecting again. Now, the app switched to a connection status of 'Connected', not 'Connecting.'

That's an improvement, although the Status panel still had only a blank space where it should display our public IP address. Why? Investigating, we found the app was trying to access the URL worlddl.pw/ip.php, presumably a page meant to return your public IP address, but, well, the link was now dead. Again, the big technical failure which WorldVPN had failed to notice.

There was a small consolation in that the kill switch correctly closed Chrome.exe when we terminated our VPN connection. But that was drowned out by the mass of problems, and the poor implementation of the app overall.

For example, while testing we noticed the app was permanently active, opening and closing Registry keys, making internet requests (trying to get an IP from the dead link), even running Windows own ping.exe tool rather than managing its own network activity. As a result, we found the app regularly achieving 20% usage when connected, a huge waste of energy and system resources. (VPN apps don't manage the connection themselves, and most use little or no measurable CPU time when they're minimized.)

Given WorldVPN's poor results so far, we didn't expect much success from our unblocking tests. And we were right. The service got us access to the easiest of targets (US YouTube), but BBC iPlayer and US Netflix remained blocked.

To measure performance, we used the benchmarking sites SpeedTest and TestMy to check download speeds from both US and UK test locations.

UK results were very acceptable, at an average 66-67Mbps on a 75Mbps test line. That's a performance drop of only 2% of the speed we achieved with the VPN turned off.

Our US connection is capable of more than 600Mbps, giving WorldVPN plenty of opportunity to show us just how fast it could go.

Unfortunately, the answer was 'not very', with median speeds less than we'd seen in the UK at 45-55Mbps.

This isn't a disaster - it might be all you'll be able to use with some devices or wifi connections, anyway - but with Private Internet Access offering speeds of 300-400Mbps and more, there's clearly huge room for improvement.

VPN resellers will appreciate WorldVPN's decent-sized network and its very, very, very low price. But for most users, that won't make up for the below-par performance, the total lack of transparency, and one of the most pathetic excuses for a VPN app that we've ever seen.