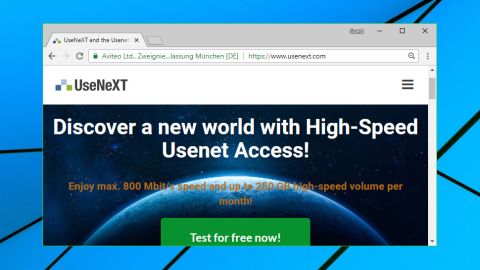 UseNeXT delivers in some areas, but there are problems, too, and overall, you'll be better off elsewhere.

Founded in 2004, UseNeXT is a German newsgroup service which claims to be 'one of the best Usenet providers worldwide', but its website struggles to back that up.

A claimed 3,400 days retention sounds good, for instance, but how does that break down between binary files and text? The company doesn't say.

UseNeXT's six data centers in Europe and the US is a more obvious plus point. Support for 30 simultaneous connections is also worth having - budget Giganews plans have only 20, although you can get 50 with the Diamond plan - and UseNeXT's claimed top speed of 800 Mb/s should be more than enough for most users.

The Premium+ Plan gives you 250GB of data, this time at a maximum speed of 200Mbps. It costs 19.95 Euros a month for a three-month term, which again looks a little costly. Giganews Platinum plan offers unlimited monthly access with no throttling for $19.99 a month.

UseNeXT has monthly plans, too, and they're more reasonably priced, with the Smart plan providing 30GB data a month with a maximum download speed of 200Mbps.

If you're curious, UseNeXT offers a 14-day free trial with 10GB of maximum-speed access to enable finding out more.

The UseNeXT website states the service offers 'maximum security', but it looks much like anyone else, really: there's 256-bit SSL encryption, a promise that the company won't store your IP address, and that's essentially it (no bundled VPN or other surprise privacy extras here.)

We clicked the Privacy Policy link to find out more, but weren't impressed to find it was only available in German, even when we specifically selected the English language site.

Speedy use of Google Translate gave us an approximate idea of the document, but that didn't leave us any more impressed. Although it was almost 3,500 words long, the Privacy Policy covered the website, registration, newsletter tracking, web analytics and so on, without mentioning the Usenet service at all.

Would the web knowledgebase at least give us some idea of the privacy basics, we wondered? Nope. It's almost entirely focused on account administration tasks (how to upgrade, cancel) and simple setup information, with no general tutorials or guides. UseNeXT doesn't just avoid discussing IP addresses or VPNs; a search of the Support site found it didn't even have a single article containing the word 'privacy', which probably tells us everything we need to know.

Signing up for UseNeXT starts by entering your email address and country. The service then requests your payment details, with both credit cards and PayPal accepted. It all looks very normal, but there are some potential catches here.

Although the company says you get 14 days for free, it also says you must cancel 'at least one day before the contract period expires' to avoid being automatically signed up to the Smart+ plan. This seems to contradict the terms of the service, which suggest you can cancel at any time within the 14 days, but keep it in mind.

Cancellation isn't straightforward, either. You can't just choose an option in a web console; UseNeXT requires you to call a German phone number (which isn't available 24/7) or send an email to inform the company that you're not interested. The small print warns you that your request must be 'clear', too, and of course UseNeXT gets to decide exactly what that means.

UseNeXT would argue that it explains all this in its Terms and Cancellation Policy, and maybe it does, but just take a quick look at that link, 4,000 words of dense legalese.  Here's an example:

"If you have requested the services to begin during the cancelation notice period, you must pay us a reasonable amount corresponding to the proportion of services already provided up to the time at which you notify us of the exercise of the cancelation right relating to this Agreement compared with the total extent of the services provided for in the Agreement."

Got that? Us neither. Even if you carefully read all 4000+ words, it would be easy to miss some of the implications of what you're signing up for.

We're not just talking about theoretical risks. Type UseNeXT into Google and you'll find plenty of reports of people who say they have been caught out by the free trial, have been charged unexpectedly and then pursued for 'debts' after they thought they had cancelled.

You'll get complaints for any service, if only from customers who weren't paying attention or competitors trying to run a company down, and normally we try to avoid placing any great weight on reports we've not confirmed ourselves. But these are so numerous that we can't ignore them entirely, and you shouldn't, either. Check out UseNeXT's 1.3 out of 10 rating at Trustpilot, for instance, and make your own mind up.

We signed up to take the trial anyway, and after providing our payment details the service sent us an email with our login details. Meanwhile the website redirected us to what it optimistically called a 'tutorial', though in reality it said little more than 'download a newsgroup reader and log in using the details we've just sent you.'

Annoyingly, the welcome email and tutorial don't even mention the UseNeXT server name or ports. We had to follow a link to the Support Center and find the 'How do I set up my newsreader?' article to figure this out.

UseNeXT recommended the Grabit newsreader, so we set that up. As expected, it only took a few moments and we could use the server right away.

One issue we noticed immediately is despite the talk of 30 simultaneous connections, UseNeXT only appeared to support 10. If we tried using 30, Grabit would time out on the others or display 'too many connections' errors. Grabit could successfully use 20 connections from Giganews on the same setup, so this seemed to be a UseNeXT issue rather than some problem with our system or software.

Performance overall was unspectacular, with UseNeXT managing maybe 2Mbps from one connection and around 10Mbps when using all ten, broadly similar to our Giganews setup. Benchmarking Usenet providers is difficult, and you may see different results depending on your hardware, software and location, but from what we can see, UseNeXT's performance isn't anything out of the ordinary.

We ran a few simple retention tests where we tried downloading files dating back to around 2010. Giganews would often tell us that it didn't have that newsgroup or couldn't find the article, but UseNeXT always found the files. The service does appear to deliver on its retention promises, but keep in mind these always vary by newsgroup and file type, and you'll have to try it for yourself to confirm that it has the content you need.

We noticed small issues with the website, including another with language, where for example the site switched from English to German when our session timed out. A menu enables switching it back in a couple of clicks, but it shouldn't be necessary, and isn't what we would expect from a professional provider.

If you have problems with the service, a Help site gives you a few hints, though these are generally very limited. The Setup guide doesn't give you tailored information for popular newsgroup clients, for instance - you're just told the server name and ports the client will use.

There's also a real support team available, and you can get in touch via ticket or a German phone number. Don't hold your breath waiting for a response, though; support is only available 10am to 8pm CET on Monday to Friday, 10am to 6pm CET on Saturday, and even then, the company warns that "processing your request might take some time."

UseNeXT offers a fair data allowance for your money, but website issues, limited support, and a stack of very poor online reviews by previous customers make it difficult to recommend.