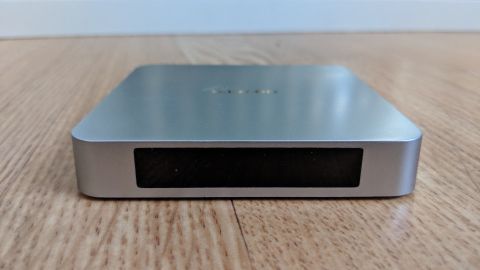 This is a good attempt at producing a business-friendly Android box that can last more than a couple of years. Android 8.1 runs great on the hardware and while the voice controlled remote is gimmicky at best, the AI One should more than fulfill its role as a cloud-based thin client.

For a device that uses a cutting-edge operating system, the Scishion AI One is deceptively bland. The silver chassis might aim to fool you into thinking that it’s metal, but it’s actually plastic, and slightly tacky, one might argue.

Online Chinese retailer, Gearbest, sent us the sample and sells the Scishion AI One for only $59.99 at the time of writing. Note that, while this price includes delivery, it is exclusive of any taxes that may be levied by HMRC or the courier companies on behalf of the vendor. Want to buy tech from online Chinese retailers? Read this first.

It is of similar size to most of the other Android boxes we’ve tested before. Size-wise, it’s barely more than 10cm square and 15mm high; you could easily fit it into a pocket should you want to use it as a roving computer.

The front is adorned by a tiny LCD screen (with white digits) that displays nothing but the time. There are no buttons – you will need to pull the plug or flick the switch at the wall to switch it off. There are plenty of slits underneath to allow air to circulate for cooling.

There are also plenty of connectors: three USB ports (one USB 3.0), one microSD card slot, one HDMI port, an Ethernet port, an optical IO and an audiovisual connector – the power port is proprietary.

Here is the Scishion AI One configuration sent to TechRadar Pro for review:

Corners have been cut here, but not in an obvious way. There’s only one USB 3.0 port, as we just observed, the Wi-Fi doesn’t support the faster 802.11ac protocol and the amount of on-board storage is about half what competing devices with 4GB usually pack. The bundled voice remote control requires an extra USB port which means that if you plug it in, you will only have two free ports left.

The rest of the component checklist is similar to the H96Max or the Beelink A1, both of which used a Rockchip CPU with DDR3 memory.

Note that the power supply unit is a 10W effort which means that in theory, should you find the right connector, you will be able to use a standard phone charger, emergency phone battery or a USB car charger to power this device.

The device gets hot when in use but that’s unlikely to cause a shutdown or noticeable slowdown. A metal enclosure, though more expensive, would have been preferred to improve heat dissipation.

The AI One runs Android 8.1, which is one of the big selling points of the device. That means that it has access to the latest security updates (February 2018) and should – in theory – be able to live at least a couple of years without updates.

Here’s how the Scishion AI One performed in our suite of benchmark tests:

Passmark: Did not run

Passmark CPU: Did not run

Antutu: Did not run

Antutu 3D: Did not run

3DMark Ice: Did not run

Basemark: Did not run

Bonsai: Did not run

Don’t hold your breath, though, when it comes to future firmware updates as smaller Chinese manufacturers are notorious for their total lack of updates.

Sadly, as you can see, the majority of our benchmark tests wouldn’t run simply because Google Play wouldn’t install them or – as was the case with Futuremark’s popular 3DMark – they would just quit. Cutting-edge has its cons when it comes to software.

The voice control feature didn’t work most of the time regardless of how clearly the words were pronounced – and when voice commands actually registered, they weren’t properly recognized.

As expected, there’s around a dozen consumer apps preloaded, with a clear focus on entertainment; these can be easily removed for a cleaner user interface.

The H96Max is marginally cheaper, has one extra USB port and twice the amount of storage. But it doesn’t offer the latest version of Android or an optical audio out and doesn’t come with voice capabilities. Still, it’s a capable alternative to the Scishion AI One.

At the other end of the spectrum is the Scishion V88, which like its bigger brother, comes with 4GB of RAM. What it lacks in terms of features (it doesn’t have voice control as it lacks the latest version of Android) or on-board storage (it only has 16GB), it makes up for with a much, much lower price tag. Oh and it has a Gigabit Ethernet port.

Another keenly priced RK3328/4GB Android box is the MXR Pro, which has similar specs to the AI One bar the newest version of Android. At around $65 (£50), it is far cheaper though. So if you can live without voice control and an on-device display, this is a great alternative.

The Scishion AI One’s main selling point is the fact that it runs Android 8.1. Compatibility with the latest versions of some of our test applications was patchy, however, which makes us wonder whether there’s a more fundamental issue at play.

If you can live without Oreo, there are other alternatives that can be considered. However, businesses will look for a secure device and the latest Android delivers security features in spades.

Buyers won’t get any firmware update assurances though, a common pitfall across this category, and a few omissions highlighted earlier in this review puts a dampener on our enthusiasm to recommend this device outright.

It is a capable box but keep an eye on the prices of rival devices, as Chinese retailers seem to enjoy dynamically changing prices to alter demand and supply almost in real-time.