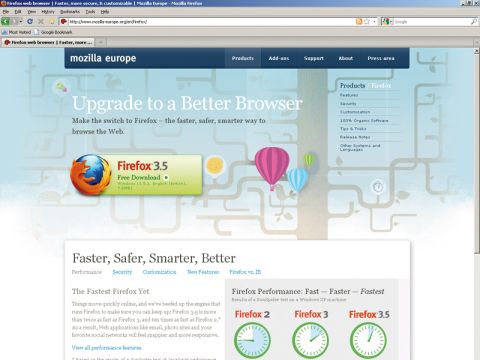 Fresh out of beta and super quick, the new Firefox is the cream of the web browser crop

We've been living with the new Firefox for some time, testing it in beta. Along the way, Mozilla renamed this release 3.5, from the working designation of 3.1. Is it justified? Very much so.

Users benefit from the addition of Private Browsing in Firefox 3.5. This has been present in the beta version from the first release and stops the browser recording your history or permanently caching files.

There are improvements to tabs as well: Firefox now opens with a second tab active and you can 'tear off' tabs into their own separate windows.

Speed is an increasingly hot topic, and 3.5 performs well in benchmark tests against previous versions. In our tests, it was nearly four times as fast as IE8 using the SunSpider JavaScript benchmark. The real progress is for developers.

As always, Firefox defines the state-of-the-art.