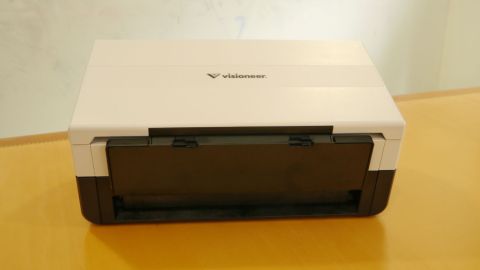 The Visioneer Patriot D40 is an excellent choice if you can live with its limitations. However, those who want more flexibility and can make do with a slower scanning speed are best off looking elsewhere.

Like so many peripheral categories from the last century, dedicated standalone scanners have been relegated to niche markets thanks to the popularity of multifunction printers (MFP), commonly known as all-in-ones (AIO), as well as the fact that the camera on most smartphones can be converted into ad-hoc scanners via third-party apps.

That accounts for 90% or so of scanning needs but the remaining 10% (converting large stacks of archived documents into digitised versions) still need dedicated physical, document scanners. And this is where the Visioneer Patriot D40 desktop scanner and its competitors like the Brother ImageCenter ADS-3600W fit in.

Physically, it is quite similar to its Brother rival and when not in use, is very compact, with a footprint around the size of an A4 sheet. Deploy its input and output trays fully though and it looks like an albatross with a massive 'wingspan' that all allows it to service an impressive array of media.

In this day and age of on-device displays, the Patriot D40 stands out due to its distinctive lack of, shall we say, visual cues. Correction, it has one single-character LCD. Clearly, this scanner was designed with simplicity in mind and is best used in conjunction with a PC.

With a rated scanning speed of 60 pages per minute (simplex) and 120 images per minute (duplex) combined with a recommended scanning duty cycle of 6,000 pages a day, it should be enough for all but the largest enterprises (note that this speed is achieved using a 200dpi resolution).

That said, its document feeder can only hold 80 pages, which is small, but then that's partly due to the nature and flimsiness of the input trays. Maybe there's a trick or two that scanner vendors can learn from printer vendors and printer paper cassettes.

The front panel of the scanner couldn't be more straightforward: there's an on/off button, simplex and duplex ones, as well as up and down arrow buttons.

Don't expect ultrahigh resolutions here. This model is limited to 600 dpi which should be more than enough for OCR tasks (Optical Character Recognition). That can be hardware-interpolated to 1,200 dpi but doing so is likely to slow down the scanning process.

The scanner can produce PDFs and searchable PDFs. Opting for the former over say JPGs slows down the scanner while choosing the latter – a far more useful option – will increase the scanning and processing time even further.

Note that this device has one USB 2.0 port and no memory card slot or host USB port, or Ethernet connection for that matter. It cannot connect wirelessly to other devices (desktop or mobile) as well. Clearly, this scanner is destined to be attached to one client computer only, which means that you can't use it autonomously unlike rivals.

The D40 comes with Visioneer's own Acuity software, Nuance's OmniPage Pro, PowerPDF and PaperPort. The scanner also offers nine one-touch options that allow for pre-configured routines to be automated – this is useful, but limited as you can't upload to say, Box, or other popular cloud-based storage lockers.

That said, thanks to its advanced TWAIN drivers, Visioneer reckons that the D40 is capable of supporting "hundreds" of enterprise content management (ECM) solutions and document image management (DIM).

For those who, like us, have long shunned the optical drive, it is advisable that you install the latest drivers from Visioneer's website and the accompanying OneTouch utility.

We put the scanner through its paces using a 20-slide single-sided document (see an example above). We used popular image management freeware Irfanview for the tests. The control panel for the D40, pictured below, is too busy and could do with some simplification.

It took around three seconds for the scanner to kick-start the process and within 30 seconds the scan was done.

However, processing – using Visioneer's native transfer method – the scans added another 30 seconds which meant that it took 61 seconds to process 20 pages, using the default settings (mono, 300 dpi), with some level of post-processing (crop, straighten and clean up edges).

Lowering the resolution will speed up the scanning speed, of course. We also noted that the scanner was sensitive to slight paper jams; despite fanning our slides, we got a couple of false positives. (See the image below).

It is evident that Visioneer knows what it is doing. The company – which also builds scanners for iconic tech vendor Xerox – has put a lot of effort into the D40, but it still left us yearning for more. We'd love to have more connectivity options as well as the ability to use the scanner on its own, without the need to connect it to a computer.

Sure, as a traditional tethered scanner, it does the job well, but scanners, like the rest of the hardware industry, have evolved with the advent of cloud services and mobile products.

The D40 may well have to follow suit especially as its suggested retail price (£387 excluding VAT – which is around $510, AU$675 – although you can get it for as little as £316 excluding VAT from Ballicom International) makes it far less compelling than the competition as an all-rounder.

But that said, if you are after a speedy beast that scans and converts sheets faster than the competition at this price, then the D40 should be high on your shortlist.