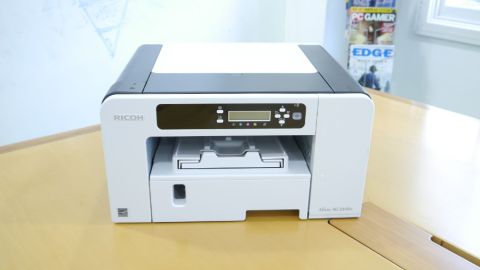 For the asking price, this is a little marvel of a printer, and one which should definitely be on your shopping list if you're after a true bargain.

Every now and then, a new printing technology comes to the market with the promise of challenging the status quo. Dot matrix was displaced by inkjet and laser printers with dye-sublimation and solid ink left by the roadside.

In 2009, Japanese technology company Ricoh wanted to do something with its proprietary GelJet solution (which uses piezo electric technology, making it somewhat related to what Epson employs in its inkjet printers) to deliver something that brings the best of the laser and inkjet worlds together.

When it launched the SG-2100N nearly two years ago, the company made some impressive claims, but things didn't pan out as expected and the printer is now available from a rock-bottom £29.99 (around $39, AU$52) at online retailer Ebuyer – that's half its original selling price.

That is impressive as it includes free delivery, a surprise given that this is a printer that weighs more than 10kg. This review unit of the Ricoh SG-2100N was provided by Ebuyer.

At the heart of that printer is a print-head that's different from others in this price range. The head is wider at 32.3mm and spreads two colours through 384 nozzles each via 2pl ink droplets.

Another significant difference is that Ricoh mixed the electrostatic transfer belt technology used in laser printers with the paper-feed conveyance technology used for inkjet printers. That, Ricoh says, reduces paper jams and allows for faster printing.

On an overall level, though, the SG-2100N reminds us of a laser printer rather than its inkjet peers. It definitely has a more business feel to it, with a cuboid shape and a two-tone monochrome colour scheme.

Its heft adds to the air of solidity and ruggedness about this device, and that robustness is even more surprising given that the printer is made mostly from recycled plastic. Ricoh claims that it can deliver a jaw-dropping 10,000-page monthly duty cycle and we'd be inclined to believe the firm.

Uniquely amongst printers, everything, from the paper trays – one of which is a pull-out affair – to the controls, are all available on the front, which means that you can shove the device on a shelf or between a drawer unit and your table-top. This is something we'd like to see more from other vendors.

Because the paper path is curved rather than straight, this printer will only handle A4 sheets up to 163gsm. Up to 250 sheets – half a paper ream – can fit in the feed tray, with the output tray having the capacity for 100 sheets in all. There's a small opening on the former that allows you to gauge how much paper is left in the tray.

The control panel sits above the trays and is a two-line (16-character) LCD screen. It is non-backlit which makes it hard to read unless you come level to it.

Opening the printer up is fairly easy, as is installing the consumables – with four gel cartridges, you won't need to discard any half-empty combo colour cartridges, which is sadly the norm for some competitors.

The colour cartridges are reasonably cheap at £9.99 (around $13, AU$17) a pop, each enough for 400 pages, while the high capacity ones (only available in black), good for more than 2000 pages, cost just over twice the price. The new ones bundled with the printer are rated at 600 pages each although they show up as half full when inserted into the printer.

We'd advise you to check the online manual for the SG 2100N and Ricoh's driver page as the latest driver release (v1.13.0.0) dates from June 2016! You will need to install the drivers as Windows 10 can't either find or load them; that entails unzipping, then searching for files in your temp folder. You will then need to add the printer, manually selecting the port USB001.

The printer also comes with a myriad of other applications for end users and IT managers, all of which can be downloaded from the aforementioned page.

Loading the cartridges is pretty straightforward, but we were taken aback by the fact that we had to wait six minutes before being able to use the device. During all that time, the printer was far noisier than expected.

The SG-2100N promises to print at up to 25 pages per minutes regardless of whether you're outputting colour or mono content. In reality, the printer never reached that speed even with the help of the 32MB on-board memory.

After a warm up period of 35 seconds, it printed 21 pages of a PDF document in 116 seconds, which translates into a printing speed of 11 pages per minute. You can however tinker with the controls to reduce quality in order to improve speed (and vice versa).

The quality of the output, helped by a 3600 x 1200 dpi resolution, certainly ranks amongst the best efforts we've seen south of £50 with impressive colour reproduction and very little smudginess.

The picture of the emerald blue lagoon of Flic-en-Flac in Mauritius was beautifully rendered, with deep blacks and no signs of banding. The downside is that it takes far longer to be printed.

Connectivity-wise, the printer offers an Ethernet port and a USB 2.0 connector, both hidden behind a flap. The power socket is recessed and there's a groove in which the power cable sits nicely (ditto for the USB 2.0 cable).

Ricoh claims that it uses only 27W to run which is higher than inkjet printers but far lower than laser ones.

At £30 (around $39, AU$52), we didn't expect much from Ricoh's printer but it pleasantly surprised us. With a long warranty (two-year onsite), exceptionally good prints and a wealth of features (including an Ethernet port) that you'd usually find on far more expensive printers, this is a no-brainer for small businesses looking for a printer that can deliver fast output at a low price.

Buy the SG-2100N while stock lasts as we don't expect it to be around for long, sadly.