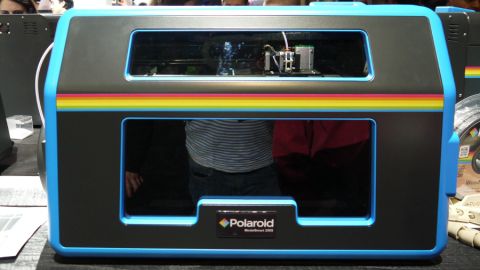 Polaroid's surprise launch at CES is a welcome one in the 3D printing space. The machine looks simple to use and a whole lot of fun.

Polaroid decided that CES 2016 was the year to announce that it was delving into the world of 3D printing. As announcements go, for the 3D printing world it is one of the biggest.

Polaroid's brand may have waned of late – due to restructures and the threat of bankruptcy – but it is a household brand nonetheless and the first to create a 3D printer.

The new 3D printer, called the Polaroid ModelSmart 250S, is part of a three-year deal with UK manufacturer Environmental Business Products (EBP). The company will be the sole manufacturer of a printer that bears many of Polaroid's famed hallmarks.

Shown off at CES 2016, techradar managed to see the printer in action and it's a good-looking device.

The build space of the printer is a decent 250 x 150 x 150mm (W x H x D) and the machine has been given a nice Polaroid makeover. Across the front and the sides of the device, Polaroid's familiar colour band has been used and its logo is in the middle near the bottom of the front case. A blue plastic trim stretches around the rest of the case.

The case has two windows on the front, and the top window shows off where the models are printed. So far so every 3D printer on the planet but Polaroid has tried to make the ModelSmart 250S one of the simplest printers out there.

Instead of layering myriad settings, Polaroid has plumped for just 10 options. This isn't a printer that wants you to fine-tune the models, instead it has modified the machine to do this for you.

The ModelSmart 250S comes with auto-calibration – hence the 10 options – a Wi-Fi-enabled camera and app control so you can print from afar and keep an eye on your work.

The printer also comes with Polaroid Prep 3D Printing Software, which can get you on your way in just three clicks. You also get some models with this software but it's probably better to use the program with more complex open-source files.

When it comes to the size of the objects you can create, Polaroid has opted for a range of 50-350 microns.

A nice touch by Polaroid is the nine colours of PLA material you can choose from. Polaroid is using the 1.75mm PLA filament and they look lovingly like old spools of film. Each of these cartridges have been given advanced chip technology – this offers up real-time accurate filament levels and will tell you if you have put the wrong colour in, which is definitely handy.

If plastic isn't your thing, then there is also a wood filament, which adds another element for you to print – this is made of 60% wood and the rest of the filament is glue. Also included are transparent Z-Axis Sheets – use these and it's easier to peel away the 3D-printed model you have just created, without damaging the print.

Polaroid has shrugged off its recent money woes and is offering a decent introduction to the world of 3D printing. While it is pitching the ModelSmart 250S at consumers, it is more likely that startups will be looking to purchase this particular printer.

With an onus on ease of use, though, and the option to print in plastic and wood, this could be a perfect way into 3D printing for those who have yet to try producing plastic products of their own.

Currently the Polaroid ModelSmart 250S will only be available in Europe, with pricing to be announced.