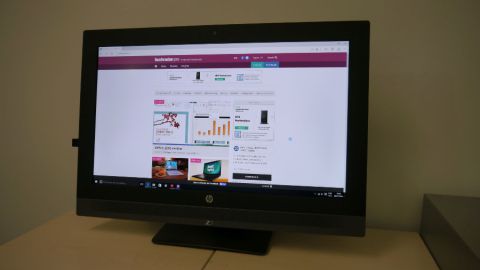 As with the Z1 G2, the G3 is not quite enough to make desktop workstations obsolete. The price of 4K monitors has dropped which means that you will get a base unit workstation with a monitor for under a grand if you shop around.

Workstations with discrete professional graphics cards are a staple of many, many businesses across the UK. The usual combination consists of a monitor and a base unit with a number of organisations also considering mobile workstations.

Both of these form factors have their pros and cons: traditional base units are great but rolling them out can take time and space. Mobile workstations lack the firepower and expandability associated with their bigger brothers.

All-in-one workstations try to fill a niche that neither of these options have yet fully addressed, and it does seem that only one Tier-1 manufacturer has identified this as being a market worth tackling (neither Dell nor Lenovo have an AIO workstation in their portfolios). This new Z1 workstation is the third-generation offering from HP in this category.

The HP Z1 G3 tries to hit four seemingly disparate targets according to its marketing leaflet: "A space-optimised, uncompromised and fully featured design, at a budget conscious price point".

Compared to its previous iteration (which we reviewed here), the G3 reverts to a simpler stand design; one that slides the AIO's base unit up and down rather than allowing extravagant tilting.

You can also pivot the unit in portrait mode if your tasks require it, although the thicker bezel at the bottom (in landscape mode) makes it look a bit odd.

Out of the box, the thing that struck us the most is how compact this model is compared to the previous generation. It may sport a 23.6-inch display but its 4K definition means that it easily trumps its predecessor which had a 27-inch diagonal and a QHD resolution.

Opting for a different stand and a smaller screen size meant HP engineers could cut down on the weight, trimming it by more than half compared to the Z1 G2. Its size was also reduced by a similar proportion, something HP says makes it ideal for "frequent moves". Sadly, there's no carrying handle.

The Z1 G3 feels solid and compact – yes, it is made of plastic but not the cheap kind. The bezels are thicker than we'd like, but that's partly to accommodate the components. And helpfully, said components can be accessed without the need for any tools.

There's a plastic latch with a blue line that secures the back of the unit. To get to the innards, you just gently move that to the right while pushing the cover up (assuming you've safely put the unit on a flat surface).

Two speakers, powered by DTS Studio Sound, are housed at the bottom of the monitor behind a grill.

The unit can take up to two additional 2.5-inch drives, and it uses a mobile GPU. Expansion slots consists of one MXM for graphics cards and three M.2 slots. Ports and connectors include two USB 3.0, two Thunderbolt 3/USB 3.1 Type-C connectors, one card reader, and one audio combo all of which are on the side.

At the back, you've got one DisplayPort, four more USB 3.0 ports, a Gigabit Ethernet port (powered by Intel) and another audio socket.

There's also a full HD webcam on top, one which can be manually hidden via a flap, plus there's 802.11ac Wi-Fi and Bluetooth 4.2 as well. A USB business slim wireless keyboard and mouse are provided with the AIO and the entire lot is powered by a 330W 90% efficient power supply unit.

The good news is you still get to keep the 4K display. That's about twice the price of a comparable base unit, like the HP Z240, but without the monitor. Upping the warranty to five years will cost you an additional £192.

HP is also pushing a new HP Subscription scheme that is essentially a flexible leasing solution made easy for small businesses (with less than three owners) and guarantees that you pay less than the upfront purchase price over the subscription term.

As expected the unit is powered by Windows 10 and comes with minimal bloatware. Other than Foxit PDF reader, there's an Office trial and HP's own Remote Graphics Software, a clever piece of technology that allows the user to access, share and broadcast from a Windows-based device.

It's essentially a remote desktop service with proprietary HP technology baked in. Check HP's site for some examples of work being streamed at 60 fps or 4K.

When it came to delivering the goods, the Z1 G3 was, well, spot on. The monitor delivered gorgeous pictures and videos, helped by one of the highest pixel densities on the market.

Sharp, well balanced images out of the box, coupled with some excellent viewing angles translate into a great overall user experience. The bundled keyboard and mouse aren't too shabby, but it is a shame that these require a receiver that takes up one USB port.

For the record, the Z1 G3 scored 119 fps and 687 cb on Cinebench R15 while reaching 1884 and 8007 points respectively on CPUID's CPU benchmark (single and multiple cores). The Cinebench processor score is particularly impressive since it surpasses the Z1 G2 by about 10% while costing around two-thirds less.

Hats off to the CPU driving this machine – the Skylake-based Xeon E3-1270 v5 which has four cores, eight threads and 8MB cache. With a base frequency of 3.6GHz, it can achieve 4GHz in turbo mode with a rather comfortable 80W TDP.

This is the second most expensive Xeon E3-12xx v5 CPU without integrated graphics and it is essentially an Intel Core i7-6700 clocked a bit higher with ECC memory support and a higher TDP.

As for the Nvidia Quadro M2000M GPU, it is a mid-range, Maxwell-based performer, roughly equivalent to the GTX 960M. Five massive copper strips help with cooling, dissipating the heat via a pair of fans.

HP has managed to own this niche for a few years now. Sadly, neither Lenovo nor Dell have provided the sort of competition we'd expect to see from them. That may be due to the fact that this market is too small for several players.

The Z1 family was possibly brought to the market in order to compete with, or at least provide an alternative to the Apple iMac which doesn't utilise the same sort of professional-grade components.

Using a mixture of laptop components (memory and 2.5-inch storage solutions) combined with a desktop CPU is an interesting alternative which we'd like others to explore, even in the laptop segment.

For now, the Z1 G3 remains the only viable option if you are looking for a transportable workstation with an all-in-one form factor.