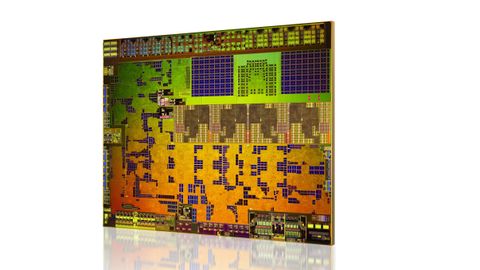 Meow: Our first taste of AMD's Jaguar cores, as found in the latest games consoles

Much of the subjective experience with this new AMD A4-5000 APU was spoiled by the use of a super sluggish magnetic hard drive in the test whitebook laptop provided by AMD. That's a pity, because it makes it very hard to get a proper feel for what it has to offer as a full-on Windows 8 chip.

But it's not a complete write off. Once applications and benchmarks have loaded, disk performance becomes much less of an issue, so what have we discovered?

Cinebench 11 is a good starting point. A score of 1.45pts is not hugely impressive. That makes the A4-5000 less than half as grunt as a quad-core AMD FX CPU. As for the match up with something like a quad-core Intel Core i7 chip, it's gruesome. The i7 is about six times faster.

It's not an even remotely fair comparison, we grant you, but it puts the A4-5000 in context. A fairer contest is with Intel's Atom. The Intel Atom D2700 dual core model typically scores around 0.75pts, so the AMD A4-5000 has it pretty much licked.

In the graphics department, well, there's really only so much you can do with 128 AMD GCN shaders. Remember, AMD's hottest desktop graphics chip, as found in the AMD Radeon 7970 board, packs 2,048 shaders clocked roughly twice as fast, which works out to a raw performance advantage of 32 times. Yikes.

For the most part, our testing reflects that modest graphics firepower. The more demanding passages in 3DMark are a genuine slide show, with frames taking multiple seconds to update.

This is not a true gaming chip. However, it does have just enough grunt for casual 3D gaming, especially with older titles. Just Don't expect to fire up Crysis 3 and experience free-flowing and fluid fragging. It ain't gonna happen.

More of an unambiguous upside is the A4-5000's battery life. We have to be careful to draw too many conclusions as this is not a retail notebook. But in the context of the modest 3,000mAh battery pack, the AMD A4-5000 looks like it should make for some impressively long lasting systems.

HD video playback is another strong point. CPU decoding of really high bitrate 1080p flash video is executed smoothly, albeit with the CPU cores dangerously close to maximum load. Normal bitrate 1080p video has the cores loaded to about 60 per cent, leaving a healthy amount of headroom.