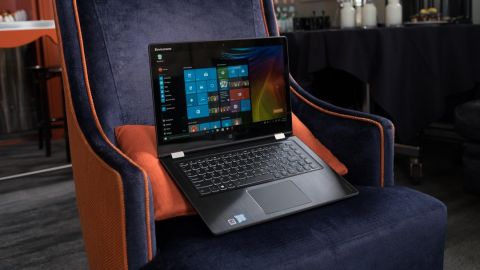 Compact and versatile, the Lenovo Yoga 700 fits most everyday work and entertainment needs, but has trouble standing out from the competition.

Finding a laptop that fits your every need is hard. You want a lightweight package for an on the go system with a spacious screen, competent performance and battery life to last you through the day. Lenovo thinks its 14-inch Yoga 700 meets this happy medium with mid-range size system featuring mid-range performance at a mid-range price of $899.

A signature feature of the Yoga series, the notebook's touchscreen can be flipped backward, converting it into a 14-inch tablet complete with convenient buttons to control volume and lock display rotation. Alternatively, it can be stood into tent mode or set on its keyboard with the screen tilted back for presentation mode.

The Yoga 700 has a smooth, soft-touch exterior and comes with two USB 3.0 ports, a single USB 2.0 port that doubles as its power connector and an SD card reader. Measuring just over 13 inches wide and 9 inches deep, the notebook is designed for quick, on-the-go use that is further underscored by fast boot-up and load times from the 256GB solid-state drive (SSD).

Its glossy, 14-inch touchscreen produces some glare, but the 1,920 x 1,080 resolution picture is so sharp and colorful that it's forgivable. Also, the fact that it can be converted into a tablet to easily read webpages in portrait mode makes the Yoga 700 a handy system, especially if you don't want to buy two separate devices.

At a glance, the Yoga 700 might seem like an overly straightforward notebook primarily for productivity, but that doesn't mean you can't have a little fun with it. Its 2.3GHz Intel Core i5 processor and 8GB of memory pack enough power to use the system for light gaming and video playback. It's not enough to drive high-performance games, but it works especially well for watching movies since it features full, loud, speakers.

The laptop's ability to convert into a tablet makes it a multi-functional system that can be quickly taken out and packed away again. It still weighs significantly more than an average tablet, but consider the 14-inch screen. Either way, in tablet mode, it's just light enough to read on comfortably on the couch.

Lenovo's compact, backlit AccuType keyboard is comfortable to type on, although I had to get used to using the Function key to make the F keys work. Out of the box, the top row of keys activates secondary functions, like volume and brightness control.

I initially thought the system had things backwards, but quickly found that it feels very natural. My main gripe about its design is that the tiny battery indicator light is on the right side, where it is completely out of view.