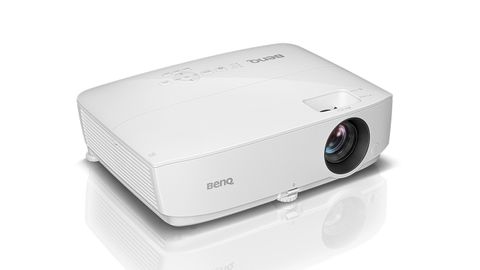 Expect sharp lines, vivid colors and exceptionally bright output. The BenQ MH530FHD is a reliable workhorse for projected imagery, whatever your projection needs might be.

TVs are cheap these days unless you want one that’s bigger than 50-inches. Whereas your average branded 50-inch model is about £600 ($500), Sony’s 55-inch Bravia KD55A1 OLED TV will cost you four times as much!

Those who want the 85-inch Sony Bravia 85XD8505 can expect to pay a twelvefold cost increase for a TV that’s not even double the size of a 50-inch model.

The solution for those who want the big-screen experience without the high cost is projection. And that’s exactly the market that BenQ is addressing with its new MH530FHD (Full HD) 3,300 lumens DLP projector, which retails at $549 (around £415).

There is something distinctly old-school about the BenQ MH530FHD, but that might not be a bad thing for this particular type of product.

Clad in gorgeously textured shiny white plastic, BenQ has tried its very best to disguise the fact that this is a rectangular metal box with a bright lamp shoved in it.

This styling is certainly an improvement over the BenQ MH530 we covered previously, as this model looks much less like a cheap electric fan heater.

It’s large, but not so big that it can’t be easily transported. BenQ built this unit more with permanent installation in mind, but it could be carried to meetings without much effort.

There are two adjustable feet at the rear, along with one at the front, and the underside has some threaded holes for those owners who fancy mounting it inverted to the ceiling.

At the rear are the inputs which include a pair of HDMI ports, two VGA connectors, one S-video and one composite. Also at the back there is a USB (Type mini B) port and RS232 (DB-9pin) connection, and both audio in and out via 3.5mm mini jacks.

DVI and DisplayPort both got the cold shoulder, but that’s not entirely unexpected for this sector. Where it does meet – or even slightly exceed – expectations is in respect of the projection electronics inside.

At its heart is a single-chip DLP, the Texas Instruments DarkChip 3. With a native resolution of 1080p, when coupled with the massive 3,300 lumens bulb, it can project a 16:9 ratio image that ranges in size from 60-inch to 300-inch. How large you can go in that range entirely depends on how far back from the wall you place the MH530FHD.

It’s a short-throw design that can generate a 100-inch image from just 5.5 foot away, and includes a 1.2x optical zoom lens that can be used to tweak the projection size nicely.

By default the lens is offset 7% from the projector axis, enabling it to work on a table as effectively as if mounted high up.

The success or failure of modern projector designs often depends on the quality of the DLP and the illumination it receives. The DLP is good here, and BenQ employed a 203W UHP lamp that delivers sufficient illumination.

The downsides of using this configuration are power consumption and the limited lifespan of the UHP bulb.

As with most home projectors, BenQ included various lamp modes that either extend the life of the bulb or increase the amount of light available for a shorter running time.

Normal mode offers a lamp life of up to 4,500 hours, Eco mode extends that to 6,000 hours, and Smart Eco promises more than 10,000 hours. That makes Smart Eco the equivalent of nearly seven years of use for 4 hours each day. And, in our testing, we found that Smart Eco looked brighter than ‘normal’ in many situations, so much so that we left it as our default setting.

The replacement bulb costs about $150 (around £115) when you do eventually need one, which is cheap compared to some projector bulbs we’ve seen.

Along with the projector, BenQ includes a small but effective remote control that allows you to navigate the configuration menus and select inputs quickly.

Overall, the MH530FHD has the price and specs to be a winner, but does it also have a show-stopping problem like the MH530 that came before it?