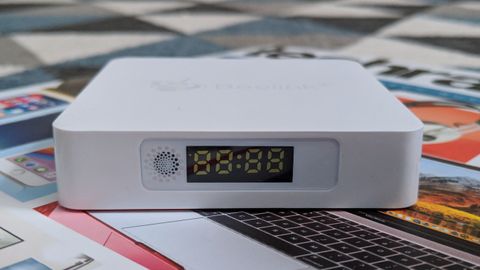 The tiny box is simple to operate: just power it on and you’re ready to go. There’s no button to press – you will land on a standard grid homepage that resembles a dashboard. Sadly there are limited configuration options.

Here’s how the Beelink A1 performed in our suite of benchmark tests:

There’s a handful of applications: a memory cleaner, media player, file explorer, music player and a proprietary app store. Fortunately Google Play is present (but not YouTube or any other Google apps).

There’s even a camera app which will be of no use (obviously), and the bundled Android 7.1.2 OS means that you get most recent new features. You can also use this box as a Wi-Fi hotspot, although you’ll need to use the wired internet connection in lieu of wireless.

Don’t expect the A1 to be a pacey roadrunner. It will be fine with mundane and office productivity tasks, but anything remotely taxing is likely to bring this system to its knees, especially games.

Having a poor video subsystem means that benchmark results for graphical tests were far below what we’d expect, with the A1 scoring zero frames per second on Antutu’s demanding 3D Marooned test.

The A5X Max is a better version of the Beelink A1 – at £45 (around $61) it’s a couple of quid cheaper (at the time of writing), but offers a staggering four USB ports, a full-size SD card reader, as well as an SPDIF port. Just note that it is a bit bigger and only available in black.

The MX9 Pro has an external antenna – which is great for improving wireless connectivity – and twice the amount of storage. It only has one USB port, though, but does come with an SPDIF connector and a microUSB port. At less than £50, it is a steal.

If you are after something different, the R-TV R10 certainly fits the bill. It is slightly more expensive at £57 (around $77) but has a distinctive circular shape. From afar it looks like a posh speaker, and the device shares the same specs as the A1, but with twice the amount of on-board storage.

There’s a lot to love about the Beelink A1 and anyone who has an Android smartphone will immediately feel at home with it. This box packs a lot of technology into such a small space, and its finish is as good as it gets for such a cheap price tag.

A decent amount of memory combined with a recent Android build means that businesses should be able to use this device out of the box with little concern over security issues or compatibility.

Our only real complaint is that the on-board storage is on the stingy side, but adding a microSD card should alleviate that. There are other solid alternatives in the same ballpark price bracket, and picking the right model for you will ultimately come down to your budget and priorities.