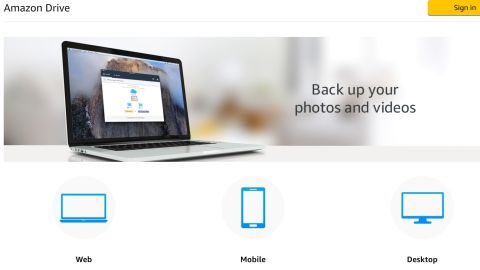 Amazon’s media-centric Cloud Drive solution offers a place for data to reside online at a reasonable price. It does now have sync but leaves anything more sophisticated to other Cloud storage providers.

Under its previous persona, it received a fair amount of abuse for missing features that almost all other packages offer. Has Amazon Drive upped its game, or is it still a very basic solution that you must add additional software to make it useful?

For anyone entirely new to Amazon Drive, there are lots of rather confusing aspects to it, not least that the software you download to your computer is called Amazon Photos (AmazonPhotosSetup.exe).

That infers that this facility is just for keeping personal pictures safe when the tool will secure any folder or files irrespective of what file type they are.

It also now includes the ability to sync, providing a means to automatically secure new files without any effort on the part of the user.

This feature was missing from the original Amazon Cloud Drive and makes the latest incarnation significantly more useful.

One minor caveat that we noticed is that Amazon Photos will only accept an actual folder or file location, and not a virtual one, such as libraries under Windows.

And, unlike Dropbox, you can pick arbitrary folders or files from across the computer and sync them with the Cloud. As some applications insist on storing files outside of the normal structures, this is a basic requirement.

Overall, Amazon’s software keeps things remarkably simple and easy to follow, making it ideal for someone with limited technical abilities.

Once your files are online, you can also access them through the Amazon web interface. With photos and videos, it is also possible to play them back through the web, but it doesn’t understand what to do with many other document types.

What’s slightly odd is that the interface also recognizes music MP3 files, but refuses or chooses not to play them.

Amazon has a desktop app, designed to work with their Amazon Music service that will play them. But, realistically most operating systems will inherently play this file types through the connected folder structure, so it seems mostly pointless to install it.

Once the Windows or MacOS app is installed a drive connection with the operating system is established and a folder ‘Amazon Drive’ is added. It also identifies how much of your capacity you’ve used, what takes up the space and the status of any files that are yet to be synchronised.

It’s worth mentioning that you don’t have to use live synchronisation. Instead, you can decide when the transfers happen. That might be useful if you have an especially poor broadband connection or are using a metred service.

Although dependent on what exact service you have, the performance of Amazon Drive is generally very good, mostly due to the block-level methodology of the sync that is employed.

If you find that too much bandwidth is allocated to the sync process and it's interfering with your latest binge-watching streamed of TV shows, you can reduce its impact through the sync tool.

One oddity we noticed with sync was that it grabs a file to replicate out to the Cloud very rapidly, and maybe it does this a bit too quickly.

If you like to create a file using a right mouse click and then rename it inside the Amazon Drive structure, you may find that a copy of the ‘new document’ file is synced back from the server to appear alongside the renamed version.

As that bug hints, there is no versioning, so should your files become encrypted by some nefarious malware then the Amazon stored versions will also be held hostage shortly afterwards.

The entire security side of this solution is dependent on the security that Amazon employs to protect personal accounts. Security has been beefed up to include 2-factor authentication if you choose to activate it on your Amazon account.

However, security hasn’t been a strong point of Amazon, and along with not having file versioning, the other weaknesses of this design are a lack of at-rest encryption and a very open method of managing shared links.

You can send a link of a file or folder to anyone, but it isn’t possible to password protect the link or limit it to access from a particular account.

That you can generate a link directly to Facebook or Twitter in a single click strongly suggests that security isn’t at the top of Amazon’s priorities for Drive.

Where Amazon Drive shines is in the pricing department, being one of the cheapest per GB offerings around.

Curiously, capacity doesn’t get cheaper the more space you take. 1TB costs $59.99 and 30TB costs almost exactly thirty times as much at $1,799.90 for a year. Oh and before you commit to any capacities, remember that your upload speeds are far slower than your downloads.

At 1Mbps on average, you will be uploading 3.6Gb of data in an hour or 11GB per day. It will take you 100 days to fill 1TB and 10 years to fill 30TB at this rage. So it makes sense to start small and then update as and when you need it.

Based on the current exchange rates, UK customers pay significantly more for the same 1TB of Amazon Drive space than someone in the USA for no obvious good reason.

For those primarily securing photos, it might well be worth signing up to Amazon Prime, as when you pay for that any photos don’t count against your storage limit, irrespective of how many you have saved.

Overall, Amazon is delivering a no-frills service that works well enough and is remarkably cost-effective for US customers. However, it lacks many of the critical features that Microsoft and Google users will be familiar, and the pricing outside America is much less convincing.