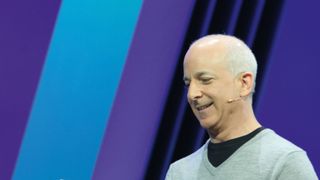 "It is impossible to count the blessings I have received over my years at Microsoft," Sinofsky said in a Microsoft News Center announcement.

"I am humbled by the professionalism and generosity of everyone I have had the good fortune to work with at this awesome company."

Tami Reller will stay on as chief financial officer and chief marketing officer while taking on the responsibility for the business and marketing of Windows.

Sinofsky's departure is reportedly mutual, though in the announcement CEO Steve Ballmer said that in order for Microsoft to stay successful, "it is imperative that we continue to drive alignment across all Microsoft teams, and have more integrated and rapid development cycles for our offerings."

Sinofsky recently led the official launch of Windows 8, which Microsoft executives called the most ambitious project undertaken by the company since Windows 95, and the Surface tablet.

He has been with Microsoft since 1989, when he became a software development engineer.

TechRadar asked Microsoft for comment and will update this story if and when the company responds.