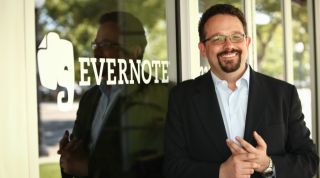 Evernote CEO Phil Libin is no fan of complexity

Evernote lets you share notebooks with other people you work with, as well as friends and family. It's most useful when there's something in a shared notebook that might be worthwhile for a project you're working on.

That should happen without you ever needing to remember to search, says Evernote's CEO Phil Libin in an interview with TechRadar.

"I want to know that someone on my team has expertise about a particular subject when I'm interested in that subject," he says. "I shouldn't have to go around asking if anyone knows about it. The content needs to support an outcome right now because there's far too much information to deal with effectively otherwise."

Libin isn't a fan of traditional approaches to this problem. He dislikes the term 'knowledge management', and says that many tools fail because they are in not integrated into the way people work. He cites the example of the company trying to set up a wiki that failed because people updated it sporadically, soon making it patchy and out of date.

Evernote is designed to overcome this by combining a company resource with a place where people organise their own information, but the real trick is making it easy to find useful information from other people. Libin says that having to carry out a search is not the answer as it interrupts the thought process.

He discovered that, counter-intuitively, it's more useful to present information when someone is taking notes rather than when they're reading about things, because they are expanding mental energy to create something. This makes them more receptive to anything that can save them work.

"The goal for this is to be so magical you don't notice anything special is going on," he says. "It just feels like you're entitled to this information. We want the experience of Evernote to feel like it's completing your thoughts."

Doing that means starting not with the indexing or search or data analysis that makes it work, but with the experience of how the user will see the information.

In the Evernote mobile software, if you start a new note, it checks your calendar to see if you have a meeting scheduled. If you do, it uses it as the title of the note, and if not it uses your current location.

Libin says that users love the feature, and that it wasn't hard to build.

"There's no data science in there. If we had started by trying to figure out mathematically clever things that we could do, we would never come up with 'Look at the calendar'," he explains.

The same is true of a feature in the latest version of Evernote Food, which autocompletes the captions on pictures of food in restaurants.

"People ask if we're doing image analysis or machine learning or passing it on to humans via Amazon's Mechanical Turk, and how can it be so fast… We just pulled the menu of a restaurant and we're autocompleting from that. "

Is that disappointingly simple? "The complexity of the implementation has absolutely nothing to do with how it's perceived - and the value," Libin points out.

"It's challenging but once you get into it, in hindsight it's just so obviously the right way to do it. And it's a lot more fun; you get to make cooler things."

If you've been using software for long enough, this kind of contextual information might make you think of Clippy the Office Assistant, asking if you want help writing a letter. Libin is ambivalent about the comparison.

"The whole industry was set back so much by things like Clippy, just because they got the character design so wrong. They were trying to do the right thing but they did it too soon and they did it clunky and it became mock-worthy and for 20 years it was just ridiculing Clippy. We are actually trying to do something that's a good a version of what they were trying to go for. But it needed another 20 years of development to make this happen."

The goal for what he calls augmented rather than artificial intelligence is to be "at least as smart as your dog" when it comes to dealing with you.

"Your dog knows things about you. There are certain mental states your dog is really good at picking up on.

"A computer should at least anticipate what you want, when you're happy or unhappy with something or you're frustrated. It should have a level of intuition around how you're feeling when you're using something. That's incredibly difficult - but it's fun to work on."