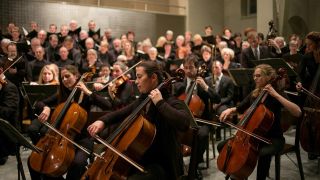 Cloud computing is without doubt one of the most vitial workplace technologies around today.

Cloud computing has become essential, with most major enterprises use it frequently to lower their capital costs and day-to-day expenses, while enabling online powerful applications, such as Software as a Service or Unified Communications as a Service.

Organizations often use a combination of public cloud, and private cloud solutions in what is termed hybrid cloud, and commonly have more than one cloud provider, which is known as multicloud.

With so many types of cloud computing in use simultaneously across an organization, there is quite a bit of complexity, and the potential for these clouds to turn into a storm, with data as well as applications in use across multiple cloud solutions.

Cloud orchestration is the process to manage these multiple workloads, in an automated fashion, across several cloud solutions, with the goal being to synthesize this into a single workflow. Just like the challenge of an orchestra is to get the all instruments to perform the same piece together, this makes cloud orchestration like the musical conductor that controls the performance and keeps it in sync. This can be quite challenging as cloud orchestration involves heterogeneous systems, across both public and private cloud solutions, which as they are often geographically separated requires managing the network that connects them as well.

A related term to cloud orchestration is cloud automation, and too often these terms are used interchangeably- although they are not synonyms. Cloud automation concerns the control a single task, such as launching a web server, and to make it rapidly repeatable, via an automated pathway with minimal operator intervention. This requires manual coding to automate the process, which is a standalone process and a single workload.

While there is an academic difference between cloud automation and orchestration, on the practical side, they get used simultaneously. When used together well, workloads are supported at a high efficiency, and at a reduced cost.

Cloud orchestration is also used with container technology, which is a cost effective, and easily scalable way to deploy applications across both public and private cloud providers. The open source container software, Kubernetes also provides cloud orchestration, leaving other orchestration solutions, including VMWare and OpenStack to integrate container support.

There are two types of models for cloud orchestration: single cloud, and multicloud. For the single cloud model, multiple applications all get run on the same cloud service provider, which is a simpler setup. The more complicated, but also more powerful model is the multicloud setup. Here we have multiple applications, which are located on different cloud platforms, and multicloud orchestration interconnects them so they can perform as a single system, with the advantage of high redundancy.

The cloud orchestration approach can provide several benefits such as:

How does cloud orchestration work?

Cloud orchestration is accomplished via a vendor that offers this; an example of this is the IBM Cloud Orchestrator, which supports public, private and hybrid clouds. Use of this platform promises benefits of reducing “Service delivery times by up to 90 percent” and a reduction in provisioning times. By fully automating previously manual workloads, common processes are implemented, and costs are reduced. Innovation is also hastened on public cloud services while business policies are consistently imposed. Service Level Agreements (SLA’s) are also met.

IBM Cloud Orchestrator 2.5 gets offered in two tiers: Base and Enterprise Edition. Both tiers include the advanced orchestration platform, a customizable self service portal, can automate many IT processes, and work with multiple cloud providers including Amazon EC2, Microsoft Azure and IBM’s SoftLayer. The higher level Enterprise tier adds instant health dashboards, multi-tenant cloud usage reporting, and what-if capacity analysis.

A dramatic case study of cloud orchestration technology is found in the greeting card company American Greetings implementation of the IBM Cloud Orchestrator. With the efficiency gained, they simultaneously were able to reduce their hardware costs by 300%, while also lowering their server provisioning time from 20 hours to a mere 5 minutes, a 99.6% reduction.

True to its open source DNA, Cloudify features a Cloud Academy for learning, and meetup groups.

With the rise of the cloud, in all of its variations, cloud orchestration is assuming increasing importance, in order to provide a seamless experience to end users. Like a maestro conducting an orchestra, good cloud orchestration can deliver on that- and more.