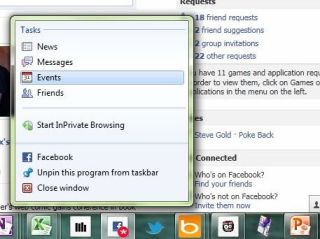 Today pinned sites like Facebook can tell you about new messages, but this will get more precise

The alleged Windows 8 slides leaked this summer included some tantalising references to web apps that sound a lot more like Windows programs (because the slides note, "currently, the indication is that app development will move to the web").

According to the slides, web apps in Windows 8 will be able to use webcams (for previewing, taking photos and streaming video), local storage, location data from the PC and ambient light and proximity sensors.

We'll get "multimedia experiences using web technologies," like being able to use the Play To option (currently in Windows Media Player) to make web content linked using HTML5 audio and video tags play back on other devices around the home.

It sounds like the job advert Microsoft posted late last year is bearing fruit (this promised that web apps would be able to "take full advantage of the power of Windows… in ways that a browser cannot… by creating a new model for modern web applications to rock on Windows").

And talking to the IE team after the PDC conference we were hearing more tantalising references to what comes after pinned sites in IE9.

"Pinned sites is all about putting the application in web application," says program manager Justin St Clair. But shouldn't that mean more than an icon on the taskbar and a jump list (welcome as those are)? How about being able to control the volume for individual web sites, or having notifications from sites appear when we don't have them open or being able to search our webmail when we're not online?

IE9 is the appetiser

"That's 100% the line we're thinking along," says St Clair. "IE9 is the appetiser for the entrée you're describing; that's where we're moving. We want HTML5 to really work, we want to help the world to realise the value of web sites as applications and this is the beginning of it."

He calls what IE9 does "step zero in realizing the full potential of web apps; allowing web applications to be installed by users and giving users (and applications) the ability to interact with those applications directly from their desktop."

PLAY TO: You could use a web app in Windows 8 to play music from an online service like Spotify on your connected TV without sending it through Windows Media Player

Pinned icons can show that you have new messages – Facebook already does – and thumbnail previews can let you pause audio from web sites but Web developers want more powerful options, like Windows apps, says St Clair.

"How do I make Gmail or Hotmail or Yahoo Mail a real competitor with Outlook? That's what Gmail wants, that's what Hotmail wants; they want to be your email application." St Clair can't speak for Google's plans, but he did share some thoughts he's heard from Microsoft web developers.

"Outlook Web Access and Hotmail have the exact things you'd expect around 'how do I show how many messages the user has unread?' The user has five reminders now and they dismiss one and it should only show four… they're wanting to scroll the thumbnail preview through a set [of views] where they to change to reflect what's happening in the app right now."

Improving jump lists doesn't take changes in Windows, just JavaScript libraries that simplify coding up the features. What comes next is "deeper and deeper integration between your operating system and your web app".

And in the long term, he predicts "we break down the barriers between Windows and web applications, when users can't tell which is which – they all live on the desktop, they all provide rich and immersive experiences."