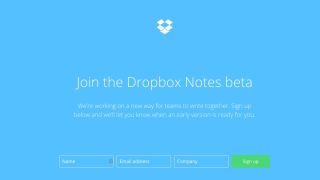 After testing a collaborative note-taking service early this month, it appears that Dropbox is now ready to have users sign up for Dropbox Notes.

According to TechCrunch, Dropbox Notes is the latest form of Project Composer, a service that was part of the HackPad acquisition. Under the Dropbox branding, the company is now inviting teams to sign up for the private beta. As part of the beta, Dropbox is asking companies for their name, email address and company name.

Currently, Dropbox isn't providing much information on its DropBox Notes site, but the service appears to be targeted towards enterprises, businesses and teams. The introductory text reads, "we're working on a new way for teams to write together."

Entering the collaborative online note-taking space, Dropbox will be competing with heavyweights such as Google with its Google Docs service and Microsoft with Office 365. Another challenger in this space is Evernote.

Unlike Google Docs and Office 365, the Dropbox service is geared towards quick note-taking rather than full document creation. Dropbox Notes is designed for taking meeting notes, rather than creating documents and files for the office. Still, the collaborative aspect, such as having multiple collaborators working on the same document simultaneously, is similar to other online office titles.

TechCrunch says that the simple interface may be an advantage as it could make Dropbox Notes more usable on mobile devices, where there is not a lot of screen real estate to pack in menu bars and ribbons.

With Dropbox integration, users of Dropbox Notes may be able to integrate files already stored on the Dropbox cloud service. This integration would be similar to what Microsoft offers on its OneNote application, allowing users to create a rich digital notebook with links to text, images, videos, and other files for later referencing.

This could make Dropbox Notes a valuable service for those who need to plan events and projects, as it serves as a digital notebook where you can reference and link other files and documents.