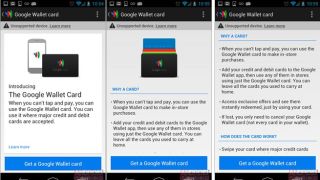 Google may soon drop a bombshell on the mobile commerce world as a report surfaced Thursday the company is preparing to launch a physical credit card.

Dubbed the "Google Wallet card," this piece of plastic is for those times users can't (or don't want to) tap and pay.

It will work just like a regular credit card anywhere major credit and debit cards are accepted - it won't be incorporating the cashback credit card aspect though.

The news comes from an anonymous tipster who gave Android Police the heads up that he had already received a confirmation email for his card.

Cut up the others

All users need to do is swipe their Wallet card and their default payment card in the Google Wallet app will get charged.

Whenever users want to switch to another card, they can simply select a different one through the app.

All cards - except Google's - can stay at home.

The card can be ordered through the Google Wallet app and sent to recipients' addresses, as was the case with the tipster.

Access to exclusive offers is also available and deals are instantly redeemable. If the card is lost, all a user needs to do is cancel their Google Wallet card - not every card they own.

This may very well be the service Google recently opened sign ups for, though the "next version of Google Wallet" seemingly suggested the app would soon open to more devices, including iOS products.

However, it could all be part of a huge Google scheme to conquer the mobile (and beyond) commerce world.

While a physical card steals the lede, other new features are reportedly on the way as well.

A "Wallet Balance" feature looks like it will let users deposit and withdraw funds while a person-to-person money transfer feature is also coming.

Whether the card and new features will extend beyond the U.S. isn't yet clear, but all this could make carrier approval obsolete for everything but tap payments.

A Wallet card would let owners of iOS and Windows Phone devices utilize a non-NFC version of the Google Wallet app, too.

TechRadar reached out to Google and was told by a company spokeswoman, "We're not commenting."