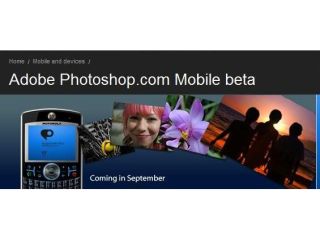 Adobe has announced it will be revamping its Photoshop Express system, including a Photoshop Mobile application for Windows Mobile smartphones.

As part of the decision to integrate the experimental Express application into the Photoshop family, it will be re-branded as Photoshop.com, and a mobile app will allow users to upload, browse and share photos with friends.

Users of Photoshop.com will still be able to upload to web-based services like Flickr and Facebook, and will sync with new Photoshop extras as well as the mobile application.

Photoshop Mobile will essentially only allow users to upload and look at photos, so you won't be able to take pictures of your mate dancing alone in a club and put a picture of a girl in there with him to send to his girlfriend (well, some of us are evil like that.)

This new application will be available in late September as a beta version for selected Samsung, Motorola and Palm phones, with more to follow as the nights draw in and the snow begins to fall.