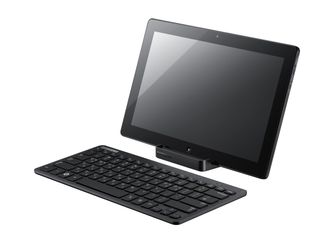 Hot on the heels of its stylish Cronos laptop, Samsung has unveiled another member of the Series 7 range set for IFA 2011 this week – the Samsung Slate PC Series-7.

It may not have a catchy name, but it does come with dual functionality – you can carry it around and use it like a regular tablet and then dock it to use it as a Windows 7-running desktop PC, complete with Bluetooth keyboard and mouse.

To this end, the SuperBright 11.6-inch LCD screen is touch-responsive, while you can also use a digital pen to scribble straight onto the tablet.

Samsung reckons it can eke 7 hours of battery life out of the Series-7 Slate from a single charge, with a full-sized USB port coming in handy to transferring data.

Other connectivity options include Wi-Fi and HSPA (3G) alongside Bluetooth; plus there's a 2MP camera on the front for video calling and a 3MP camera on the back for snapping pics as you go, we suppose.

Windows 7 tablets haven't met with much success, with many manufacturers wisely holding out for 2012 and the promise of the tablet-friendly Windows 8 software; it'll be interesting to see how the Series-7 Slate PC fares when we get our hands on it at IFA this week.

We'd also expect the slate to get an upgrade to Windows 8 when the software is released, which could make it a sound investment; no word on UK release date or pricing yet though. Stay tuned.

Check out what else Samsung got up to this IFA, with our handy video round up: