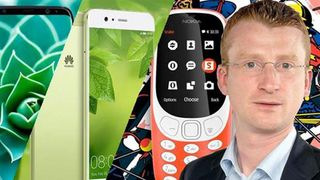 In this exclusive interview with Mobile magazine, the retail boss outlines the role of major new devices within their online and in store portfolios. Speaking generally about the releases he opened, ‘We’re pretty positive going into this period. We’re coming out of a period where there’s been less handset innovation and quite a lot of activity in the SIM only market over the last few months. That’s fine, customers are reflecting that trend where we see a stagnant period in the mobile innovation space and right across the industry that means these launches are a long time coming.’

Describing the reason why retailers are especially eager for the new devices this year, he added, ‘It wasn’t helped by the Note 7, and by the S8 being delayed because while we normally have peaks and troughs, this one seems to have been an elongated trough.’

The S8 launched with a joint event in London and New York, in late March, with pre-orders opening immediately through partners such as Carphone Warehouse. Just a week later, the retailer announced that pre-orders of Samsung’s flagship were up 43% year on year, citing the strength of the ‘infinity screen’ display technology as a main driver. Asked if the S8 launch represents a change of approach by Samsung, Fennell told Mobile, ‘It’s a lot more customer focused, I was skeptical at first about unbox your phone, but having seen how it flows through the above the line marketing and into the channel I think it’s quite clever and it will resonate with customers.’

With the release date just one day after Samsung’s device announcement, Huawei’s P10 is ranged across the UK’s big five high street retailers. Describing Huawei’s flagship, Fennell stated, ‘it’s been a really good product; the photography and gallery association is really good. Price point wise we’ll see how customers decide between and how that works out.’

Considering what role players outside of the top two play in the UK market, he mused, ‘it’s important in a world where the market has consolidated into two big players then a number of smaller players. It’s important that the smaller players focus on what they bring, what’s their differentiator, what’s the feature or features of choice that would make you select that product over others in the range and we’re starting to see manufacturers do that now.’

It’s not just traditional players like Sony, LG and HTC either, with Carphone Warehouse ranging lesser-known device vendors including CAT, ZTE, STK, IMO, Archos and HP, especially online. When asked what role these play in an increasingly consolidated market, Fennell answered, ‘New brands are more than welcome because the principle of the brand and the legacy of the business is all about comparison and saving money, bringing new people and things in is part of the business’ DNA. So while we do operate in a more consolidated market, yes we do want to see this stuff and customers want to see it too. So within reason it’s up to us to select the right range of products and put all of the options in front of them. Our principle is that while we may not put a newcomer into a thousand shops over night because that might consumer a lot of my cash and not sell. But through the multi-channel business we have the option to put an extended range on the website, gauge customer interest, understand how they interact with the product, use our analytics to see interest levels, look at sales levels and then look at rolling it out to 10 stores, a hundred stores of maybe the full 1,000.’

Asked for an example of a success story for a new brand through Carphone Warehouse, the retail leader pointed towards a certain legacy name, ‘Well, we’re going to have some fun with Nokia soon aren’t we? I’m very much looking forward to it. It’s compelling. We got into that quite early, put it in front of customers quite early so when that comes to market in May we’re set up to make the most of the high levels of interest we’ve got from customers already. As with everything in retail there are success stories and there are failures, but I believe it’s important to give things a go.’

Describing the consumer reaction to the Nokia ranging including the new 3310, he continued, ‘We’ve seen a lot of interest, it remains to be seen whether it’s for nostalgic reasons where people just want to come in and have a look at it, or actually everyone is going to revert back and use the phone they used 15 years ago. I think it’s probably the former but nevertheless let’s wait and see. There’s a definite use case for the product.’