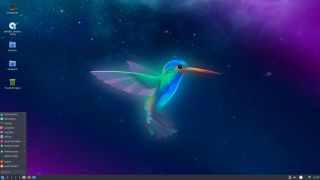 Modern Linux distros are designed to appeal to a large number of users who run modern hardware.

As a result, they have become too bloated for older machines, even if you manually delete files. Without a healthy dollop of system memory and an extra core or two, these distros may not deliver the best performance.

Thankfully, there are many lightweight distros, trimmed and tweaked by expert hands, which can be used to breathe new life into older hardware.

But there's one caveat to bear in mind when working with lightweight distros – they usually manage to support ancient kit by cutting away just about everything you take for granted, such as wizards and scripts which make everyday tasks easier.

That said, these lightweight distros are fully capable of reviving older hardware and can even function as a replacement of your current operating system, if you're willing to adjust to their way of working and install extra programs as necessary.

A featherweight distro designed for desktop use

Absolute Linux is a lightweight distro designed for desktop use, and as such comes preinstalled with the Firefox browser and LibreOffice suite. It's based on Slackware 14.2 but unlike its parent OS, aims to make configuration and maintenance as simple as possible.

New versions of Absolute Linux are released roughly once a year. The most recent version (15.0) was made available for download in February 2018. It’s available as a 2GB ISO for 64-bit computers. The OS is still in the beta testing stage so may perform a little unpredictably, as ever with beta software. Whichever version you choose, there's a massive selection of lightweight applications available.

The installer is text-based so there's no Live mode, but nevertheless it's incredibly simple to follow. The way Absolute is structured also means that you can add and remove packages from the install media to create a distro which truly suits you, though you'll need some time and experience with Linux if you really want to make the most of this feature.

Once installed, Absolute Linux is incredibly nimble. This is ensured through the lightweight IceWM window manager, along with popular apps such as LibreOffice, making this OS perfect for older machines. There's also plenty of documentation accessible from within the desktop itself to assist new users.

Tiny by name, and most certainly tiny by nature…

The Core Project offers up the tiniest of Linux distros, shipping three variants on which you can build your own environments. The lightest edition is Core, weighing in at just 11MB, which comes without a graphical desktop – but you can always add one after installation.

If that's too intimidating, try TinyCore (currently v9.0). The OS is only 16MB in size and offers a choice of FLTK or FLWM graphical desktop environments.

You can also choose to install CorePlus, which measures a relatively hefty 106MB. This spin offers a choice of lightweight window managers such as IceWM and FluxBox. CorePlus also includes support for Wi-Fi and non-US keyboards.

TinyCore saves on size by requiring a wired network connection during initial setup. The recommended amount of RAM is just 128MB. There are 32-bit and 64-bit versions as well as PiCore, which is a build for ARM devices like the Raspberry Pi.

This minimalist distro doesn't feature many apps. After installation there's little beyond the Terminal, a basic text editor and a network connection manager. The Control Panel provides quick access to the different configurable parts of the distro such as display, mouse, network, etc. Use the graphical package manager 'Apps' to install additional software such as multimedia codecs.

A neat spin on the popular OS for older machines

The 'L' in Lubuntu stands for lightweight, and it unashamedly appeals to those Ubuntu users who are looking for an OS which requires fewer resources than most modern distros, but doesn't force you to compromise on your favourite apps.

Lubuntu is primarily designed for older machines. The default desktop is based on LXQt, which is far less resource hungry than mainstream Ubuntu's Gnome 3 desktop. It comes with a plethora of office, internet, multimedia and graphics apps, along with a wide assortment of useful tools and utilities.

As a lightweight distro, Lubuntu focuses on being fast and energy efficient. It features alternative and less resource intensive apps where possible. The most recent releases have also reverted back to using LibreOffice rather than Abiword for word processing.

This doesn't mean that Lubuntu is lacking, though: it's based on Linux Kernel 5.00 and Ubuntu 18.04, so it's a proper modern Linux distro – it's just shed all unnecessary weight, in the manner of a rally car having all but one of its seats removed.

The most recent release of Lubuntu (19.04 – Disco Dingo) has now lowered the minimum required RAM to run the OS to 500MB. However, to ensure smooth running, try to use a machine with at least 1GB of RAM. It’s available in 32-bit and 64-bit incarnations.

The unique selling point of Lubuntu is its compatibility with Ubuntu repositories, which gives users access to thousands of additional packages that can be easily installed using the Lubuntu Software Center.

A lightweight spin on Ubuntu LTS

LXLE is a lightweight version of Linux based on the annual Ubuntu LTS (long term support) release. Like Lubuntu, LXLE uses the barebones LXDE desktop environment, but as LTS releases are supported for five years, it emphasises stability and long-term hardware support. The most recent version at the time of writing (16.04.4) is a remaster of the current of version of Ubuntu LTS.

Aimed primarily at reviving older machines, the distro is designed to serve as a ready to use desktop out of the box, specifically tailored to appeal to existing Windows users.

The developers spend a considerable amount of time making all the necessary mods and tweaks to improve performance, but they don't skimp on niceties. Aesthetics are a key area of focus as evidenced by the hundred wallpapers which are included, along with clones of Windows functions like Aero Snap and Expose.

The distro boasts full featured apps across categories such as internet, sound and video, graphics, office, games, and more. It also includes plenty of useful accessories such as a Terminal-based Weather app and Penguin Pills, which is a graphical frontend for several virus scanners.

Like Lubuntu, LXLE is available as a Live image for 32-bit and 64-bit machines. The hardware requirements are 512MB of system RAM at a minimum, with 1GB recommended.

This compact OS will even run on an old 486 PC

Damn Small Linux (DSL) lives up to its name in that the install image is barely 50MB. It's designed specifically for x86 PCs and will run on an ancient 486 CPU with 16MB of RAM. This means it can run fully inside your system memory which can result in phenomenally fast speeds.

DSL is usually run from a USB or CD, or you can do a Debian-style installation to a hard drive if you prefer.

Despite the extremely minimal desktop, you may be surprised at the vast array of tools that come preinstalled. You can surf the web with a choice of three browsers – Dillo, Firefox or the text-based browser Netrik. You can also examine office documents using the Ted word processor and check your email with the minimal Slypheed client. Or indeed sort through your data with the ultra-tiny emelFM file manager.

The latest stable version of DSL (4.4.10) was released in 2008. However, you can update and add new applications using the MyDSL Extension Tool.

This Slackware-based distro is designed to be completely portable and run on removable media such as a USB stick or CD, but can just as easily be installed to a hard disk. The distro is incredibly fast as it's small enough to run entirely from system RAM.

The unique selling point of Porteus is that it exists in a compressed state (less than 300MB for the Cinammon and MATE editions) and creates the file system on-the-fly. Besides the preinstalled apps, all additional software for the distro comes in the form of modules, making the OS very small and compact.

Porteus is available for 32-bit and 64-bit machines. The distro provides users with the choice of KDE, MATE, Cinnamon, Xfce and LXDE desktop environments when downloading the ISO image.

Unfortunately the option to build your own custom ISO has been removed since we previously looked at Porteus, but the pre-built images offer a decent selection of software and drivers, as well as an excellent selection of tutorials to help you get started.

This distro’s credo is 'keep it simple, keep it small', and it manages this to great effect. It allows users to mould the distro to serve just about any possible purpose – Vector Linux can be a lightning-fast desktop for home users, and can just as easily be used for running servers, or as the gateway for your office computer.

This Slackware-based distro tends to favour GTK+ apps such as Pidgin Messenger, but you can use the TXZ package manager to fetch and install additional software.

One of the veterans of the lightweight Linux world

Puppy Linux is one of the oldest lightweight distros out there. The project has been turning out slim, sleek and fast distros for 15 years now, and offers different versions depending on the underlying environment. Puppy Linux 8.0 (Bionic Pup) is based on Ubuntu Bionic Beaver (18.04).

The distro is full of apps, belying its small size – some are quite unconventional, such as Homebank which helps you manage your finances, or Gwhere which is for cataloguing disks. There are also graphical tools to manage Samba shares and set up a firewall, for example. The sheer variety of applications is impressive.

The Bionic Pup edition of Puppy Linux is compatible with Ubuntu's repositories, giving users access to the parent distro's vast software collection. The handy QuickPet utility can be used to install some of the most popular apps.

Linux Lite is based on Ubuntu (currently Long Term Support version 18.04). It is specifically developed to ease Windows users – particularly those with old machines running Windows XP – into the world of Linux.

It features familiar tools like Firefox (with built-in support for Netflix), plus VLC Media Player and LibreOffice are preinstalled. The OS also includes the zRAM memory compression tool which makes it run faster on older machines. There's also a special ‘Lite Upgrade’ utility.

Despite its name, this distribution isn't the least resource hungry out there, as it requires both a 1.5GHz processor and at least 1GB of RAM to run smoothly. That said, this shouldn't be too much to ask of any computer made in the last decade.

Try it on modern hardware and you'll be amazed at just how quickly it runs. Linux Lite can boot from a Live medium such as a USB stick or CD, or install to your hard drive. It also supports multi-booting so you can keep your existing OS if you wish. The distro is available for both 32-bit and 64-bit systems.

Crunchbang (or #!) was a very popular Debian-derived distro specifically designed to use as few system resources as possible. While it was discontinued in 2013, the community fondly remembered its lightning speed and responded with two Crunchbang-based distros to continue its legacy.

However, one of those successors, Crunchbang++, has now been discontinued. BunsenLabs is still active, though, and its current release (Helium) is based on the latest stable version of Debian featuring a gorgeously configured Openbox window manager and its own repository of core packages.

There's also a point release option, which is regularly updated if you want to stay on the bleeding-edge. It requires at least 256MB of RAM to run (with 1GB or more recommended).