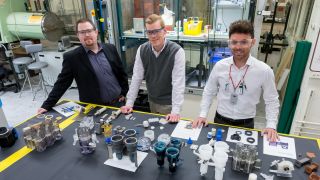 Over in the US, scientists from the Department of Energy’s Argonne National Laboratory have 3D-printed parts which will facilitate recycling more spent nuclear fuel.

Currently, nuclear engineers can recycle 95% of spent fuel from a nuclear reactor, with the remaining 5% having to be stored as ‘long-term’ waste. The aforementioned 3D-printed equipment can be used to sort and recycle some of the latter, meaning that an extra 2% of nuclear waste can be recycled.

That might not sound like a particularly impressive percentage, but when you consider that it’s 2% of 5% of waste that can’t be dealt with without moving to some kind of long-term storage – which obviously isn’t an ideal scenario – you get a bit more of an idea of the sort of leap that’s being made here.

In fact, this extra 2% of recycled waste would mean that the length of time for which prolonged storage is required would be vastly reduced.

Andrew Breshears, a nuclear chemist at Argonne, explains: “Rather than store 5% for hundreds of thousands of years, the remaining 3% needs to be stored at a maximum of about one thousand years. In other words, this additional step may reduce the length of storage almost one thousand-fold.”

A further consideration is the process of breaking down this nuclear material could be used to generate electricity in a fourth-gen fast reactor, the scientists assert.

The benefits of using parts from a 3D printer for this recycling process include offering “inherent safeguards against nuclear proliferation”, as well as the flexibility they bring to the process. As Argonne engineer Peter Kozak explains: “If a part did fail, it would be easy to reprint and replace it. We could easily add or remove steps.”