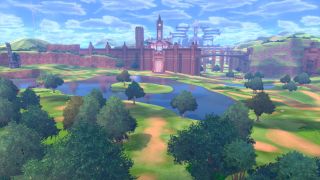 Pokémon Sword and Shield are now available on Nintendo Switch and one of the most exciting elements of these new games is the Wild Area.

Introduced in the first couple of hours of play, this expansive location in the centre of the map marks the closest the Pokémon series has come to an open world and it can be pretty intimidating when you first enter it—what to do with all this unfamiliar freedom?

Well, the beauty of it is that this is pretty much up to you. Want to run around and see the sights? Go for it. Prefer to battle some wild Pokémon? You can do that too. Looking for a specific type of Pokémon to catch? Go looking for it.

We’ve put together a collection of hints and tips to help you make the most of the Wild Area, whether it’s your first or fifteenth time in it.

Give a little whistle

When you’re wandering around the Wild Area, you might notice some Pokémon (commonly flying-types) soaring over your head. They won’t bother you until you bother them so if you want to catch their attention simply walk near them and press the left analog stick to whistle. That’ll bring them down to your level for an encounter.

In previous Pokémon games you’ve had to find a fishing rod (usually gifted from an NPC) before you can start fishing for Water-type Pokémon. That’s not the case in Sword and Shield. If you see a spot of water in the Wild Area that’s slightly darker and bubbling, just walk to the water’s edge and press A to start fishing. When a Pokémon bites, draw your line in by pressing A again.

Make sure you come back to the Wild Area after you get the bike upgrade later in the game that allows you to travel out onto water. You’ll be able to access further out fishing spots then too.

The Wild Area is pretty expansive so if you want to make your way around it a little faster, hop on your bike and get a temporary boost by pressing B. You can lengthen this boost by upgrading your bike which we’ll go into below.

Watts are a form of currency in Pokémon Sword and Shield that’s primarily used in the Wild Area and there are a few ways to pick it up. The easiest way is to approach a Raid Den that isn’t active and interact with it. This will yield at least 50 Watts with no effort. You’ll also receive Watts for actually taking part in a Max Raid Battle and by battling or catching Pokémon in the Wild Area that are glowing.

What’s the point in this, you ask? Well, Watts can be traded with the various NPCs dressed in League uniforms that are doted around the Wild Area for a variety of items and services. You can get your hands on PokéBalls, Pearls and new TR moves. You can also upgrade your bike’s boost up to three times using Watts and recruit a couple of diggers who’ll find you things like evolutionary stones and fossils for a bargain 500W.

Speaking of Watts, you can earn some more by taking part in the Wild Area’s Rotom Rally mini-game.

To start this game, you have to find the Watt trader who gives you the choice of courses, each a different length. Once your course is chosen, you have to ride around it as fast as you can on your Rotom bike. The faster you go, the more points you get.

As you go around the course, follow the balloons. Try hitting small balloons for a speed boost and avoid the large red ones which incur time penalties. Also try to avoid hitting any wild Pokémon wandering around. One, it’ll slow you down and two, it’s just not a very good look for you.

The Wild Area is home to Pokémon of all levels but you can’t catch them all right away. In Sword and Shield, the gym badges you have determine the level of Pokémon you’re able to catch so if you’re going into the Area with one badge under your belt there’s no point in attempting to capture a level 60 Corviknight. When you defeat gym leaders, they’ll tell you what your new level capture cap is so it’s worth returning to the Wild Area after each victory to have a look around.

The highest level Pokémon tend to be those strutting around outside of the grass.

Throughout the Galar region you’ll spy sparkles on the ground as you’re walking around. These indicate items to be picked up and they’re in the Wild Area as well as everywhere else. Sparkles can be a range of things but they’re always worth picking up. To interact, just walk up to where you spotted the sparkle and press A. These re-spawn unlike those in the wider game world so don’t assume you’ve got them all.

Organize your team before entering a Raid

Like in a Pokémon battle, the Pokémon listed first in your party is the one that will be sent out to battle in a Dynamax Raid. Unlike a Pokémon battle, however, you don’t have the option to swap it out as only one Pokémon enters a Raid battle.

When you first interact with an active Raid den (they’re the beams of red light you’ll see scattered around the Wild Area), you’ll be able to see the type of the Pokémon you’ll be facing before you confirm that you want to go ahead either with friends or an AI team, so use the opportunity to rearrange your team and send out the ‘mon that offers you the best chance of winning, whether it’s your most powerful or the one with a type advantage. Raid battles can be tough so this is key to winning.

If your Pokémon take some damage when battling, you don’t have to leave the Wild Area to heal them at a Pokémon Centre, you can just set up camp and cook them a curry.

If you’re short on the right ingredients or berries, there’s also an NPC outside the train station at the entrance to the Wild Area who will heal your Pokémon up for you.

It's worth exploring the Wild Area in its entirety as different biomes will naturally house different Pokémon types. The Watchtower Ruins, for example, is the place you’re more likely to encounter Ghost-types, while at Giant’s Seat there are Steel-types abound.

However, the changing weather also has an effect on the Pokémon that spawn so it’s worth popping back now and again in the event of a notable weather change. When you open up the game’s menu with the X button, significant weather events in the Wild Area will appear in an an info pop-up box sand you can also check the weather conditions across the region on the Town Map so have a look before trailing back.