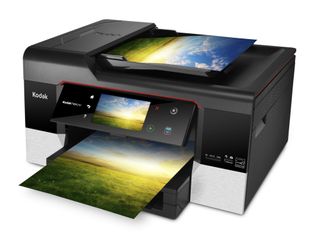 Kodak has focused its attention on printer sales in recent years

Iconic imaging giant Kodak may be preparing to file for Chapter 11 bankruptcy in the coming weeks, according to the Wall Street Journal.

The newspaper says that the 131 year-old American institution is currently scrambling to sell off a 1,100 strong patent portfolio in a bid to stave off the threat.

However, it is also actively in talks with banks in an attempt to reach a $1 billion financial package would give the company room to continue operating during bankruptcy proceedings, says the WSJ.

When quizzed on the situation the company simply said it "does not comment on market rumor or speculation."

The situation represents a dramatic turn in fortunes for the company, which once dominated an entire industry. It also threatens the future of Kodak's 19,000 employees.

In recent times the company has placed much of its stock in the printer industry and has never quite recovered from the demise of camera film, as foreign competitors shrank its market share, before digital cameras and smartphones made it virtually obsolete.

The WSJ report points out that it was Kodak that invented the first digital camera in 1975, but was unable to capitalise on its discovery.