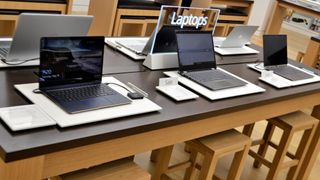 Following a seven year slump, PC sales grew in 2019 compared to the previous year according to new reports from both IDC and Gartner.

However, this increase in sales was largely driven by demand for Windows 10 upgrades as Windows 7's end of life date has now arrived.

During the fourth quarter of 2019, global PC shipments totaled 70.6m units according to Gartner and this figure represents a 2.3 percent increase from the same period last year. For the full year though, 261.2m units were shipped and this shows a growth rate of 0.6 percent from 2018.

IDC reported that fourth quarter PC shipments came in at 71.8m units which represents 4.8 percent growth. Over the course of 2019, shipments came to 266.69m units, showing a 2.7 percent increase over 2018.

The reason that Gartner and IDC's PC sales numbers don't line up is because both firms define the PC market slightly differently. Gartner includes desk-based PCs, notebook PC and ultramobile premiums such as the Microsoft Surface in its PC sales numbers but not Chromebooks or iPads. IDC on the other hand, counts desktops, notebooks, workstations and Chromebooks but not tablets or x86 servers in its figures.

While Windows 10 was first released back in 2015, many consumers and even some businesses have been reluctant to make the switch to Microsoft's latest operating system. However, as Windows 7 will no longer receive security updates, many users have finally made the decision to invest in new PC hardware as these devices ship with Windows 10.

These upgrades will help the PC market grow in the short term but according to both IDC and Gartner, innovation is required to help PC sales continue to grow in the long term. Both firms also noted in their reports that Intel's CPU shortage has continued to impact the market in Q4 2019. IDC made the point though that adoption of AMD CPUs did provide some relief to this problem.

Lenovo, HP and Dell held onto their spots as the top three vendors according to both firms' reports and these three companies accounted for close to 65 percent of the market last year.

"The PC market experienced growth for the first time since 2011, driven by vibrant business demand for Windows 10 upgrades, particularly in the U.S., EMEA and Japan. We expect this growth to continue through this year even after Windows 7 support comes to an end this month, as many businesses in emerging regions such as China, Eurasia and the emerging Asia/Pacific have not yet upgraded."