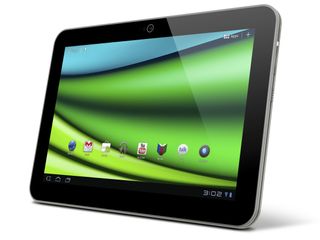 The new Toshiba Excite 10 Android tablet has been announced at CES 2012, showing a really stylish device.

The 10.1-inch device seems to be nailing nearly every spec tick-box going, and has managed to do so in a brushed aluminium frame with a 7.7mm thickness.

You can check out TechRadar's Toshiba Excite 10 video below:

Other specs to interest the casual user include: a TI OMAP 4430 1.2Ghz dual core processor, a 5MP camera and Gorilla Glass to protect the 1280 x 800 pixels packed onto the display.

We've also got stereo speakers, a 2MP front-facing camera, and ports for Micro HDMI and Micro SD cards, as well as a micro USB connection to boot.

The internals could probably do with a power boost beyond the 1GB of RAM on board, but at least it will apparently ship with Android 4.0 at launch, which is something bigger brands can't seem to manage.

The Toshiba Excite 10 has only been given a US release date so far, and will launch in Q1 this year for $529 if you fancy the 16GB model.