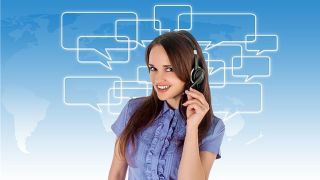 The use of audio for commands has become popular for use with assistants such as Alexa and Siri, which also allow for speech-to-text to be used, among other tools. It's also becoming much more common for audio to be used to convert text-to-speech for a number of reasons.

The traditional one is for helping people with additional sight needs. However, as with audio assistants, users commonly find that audio can be much easier to work with. This is especially the case where multitasking is required, with audio allowing the user to also direct their attention on some other physical task.

This is especially highlighted by the rise of audiobooks, which allow the user to drive, walk, or otherwise engage in a physical activity that would preclude using a text-version as impractical.

Therefore it's no wonder that text-to-speech and other voice software is becoming more commonly used, allowing the user to engage in other activities at the same time, whether it be walking, gardening, household chores, or similar.

Text-to-speech software is also popular in business environments, with people utilizing it to boost productivity, especially when it comes to voice and speech recognition software.

As we move into 2020, here are the best in text-to-speech software and apps.

Best text to speech software - at a glance

A speech synthesis solution for developers

It sports an API that lets you easily integrate speech synthesis capabilities into ebooks, articles and other media. What’s great is that Polly is so easy to use. To get text converted into speech, you just have to send it through the API, and it’ll send an audio stream straight back to your application.

You can also store audio streams as MP3, Vorbis and PCM file formats, and there’s support for a range of international languages and dialects. These include British English, American English, Australian English, French, German, Italian, Spanish, Dutch, Danish and Russian.

Polly is available as an API on its own, as well as a feature of the AWS Management Console and command line interface. In terms of pricing, you’re charged based on the amount of text characters you convert into speech. The Free Tier allows for up to 5 millions characters per month for twelve months, but if you need more than that it costs $4 per million characters for speech.

Based in Germany, Linguatec is another company that’s been creating text to speech applications for a number of years, and its flagship Voice Reader Home software can quickly convert text into audio files.

With the standard edition costing €49 (£42/$57) per voice, it’s a little on the expensive side - but you’re able to convert text such as Word documents, emails, EPUBs and PDFs into audio streams quickly. You can then listen to them on a PC or mobile device. What’s more, you can choose from 67 different voices, and there’s support for up to 45 languages such as French, Spanish, Italian, Danish and Turkish.

The aim of this software is to improve productivity. For instance, you can get the application to read out manuscripts for speeches, lectures or presentations to look out for incorrect word ordering or missed-out words. Overall, the user interface is sleek and easy to use. You can quickly adjust the speed, pitch or volume of audio files, and each export option is clearly listed.

When it comes to technical requirements, the software works with Window Vista, Windows 7, 8 and 10. Each voice will take up to 1GB of disk space, and it works best if your device has at least 2GB of RAM.

Speech synthesis for the education sector

Speech synthesis applications are also popular in the education world, where they’re used to improve comprehension among other things. Capti Voice is one such effort, letting you listen to anything you want to read. With it, you can personalize learning and teaching, as well as overcome language barriers.

Positioned as an offline and online reading support solution, Capti Voice is used by a range of schools, colleges, businesses and professionals across the world. Supporting more than 20 languages, the app can be used to improve vocabulary and as part of active reading strategies. It can narrate a range of content, including ebooks, articles and web pages.

You can also use the software with cloud storage platforms such as Google Drive, OneDrive and Dropbox, and it’s universally accessible across a plethora of devices, content formats and age groups.

There's a free version for personal use, which allows for a lot of features but not the higher-end ones, such as higher-quality voice samples. You got those with the Pro version, which was previously advertised as costing $1.49 per month or $17.99 annually. The Educator level was previously advertised as from $0.50 per student per year, but for larger schools this means the software could become quite expensive to license.

If you’re looking for a cloud-based speech synthesis application, you should definitely check out Natural Reader. Aimed more at personal use, the solution allows you to convert written text such as Word and PDF documents, ebooks and web pages into human-like speech.

Because the software is underpinned by cloud technology, you’re able to access it from wherever you go via a smartphone, tablet or computer. And just like Capti Voice, you can upload documents from cloud storage lockers such as Google Drive, Dropbox and OneDrive.

There are three plans available, with the most basic Web Free allowing for unlimited use of basic voices, and up to 20 minutes use of Premium Voices. Web Premium unlocks these and up to one million characters of speech per month, priced at $9.99. Premium plus allows all features for $19.00 per month or $110/ year.

There are also plenty of great text to speech applications available for mobile devices, and Voice Dream Reader is an excellent example. It can convert documents, web articles and ebooks into natural-sounding speech.

You can get the software to read a list of articles while you drive, work or exercise, and there are auto-scrolling, full-screen and distraction-free modes to help you focus. Voice Dream Reader can be used with cloud solutions like Dropbox, Google Drive, iCloud Drive, Pocket, Instapaper and Evernote.

Other text to speech software to consider

There are a number of other software applications you can try or buy for converting text to speech (TTS), each one tending to focus on a different aspect. For example, some specialize in one area, such as providing speech for documents, or providing narration for ebooks. Then there are other software solutions that aim to be as comprehensive as possible. Each one has its own advantages and benefits, according to different user needs. We'll list some of the other speech-to-text options below:

iSpeech is especially good at providing text-to-speech in different audio formats. It can read text from most any document format and even chat apps, and save to Wav, MP3, ogg, wma, aiff, alaw, ulaw, vox, MP4 and other audio  formats. What's even better is that it provides mobile apps for use not just for Android or iOS devices, but also Blackberrys.

Zabaware Text-to-Speech Reader has a range of voice options available to read any text, and there's a free version in which you can access the basic synthesized voice. However, there are upgrade packages available to use more realistic-sounding voices, not least the Cerevoice and AT&T voice packages, both starting at $24.95 as a one-off purchase.

Audio Book Reader is one of the more simple offerings, intended to help read ebooks aloud on your existing device. While it's capabilities are more limited than offers, it's Freeware and therefore costs nothing to try and use. You can also customize how the voice sounds by changing pitch and speed to suit your personal tastes.

Read4Me TTS Clipboard Reader is another simple but surprisingly versatile text-to-speech application that uses a pre-installed SAPI5 TTS voice to read the contents of your clipboard when a hotkey is pressed. This is where Read4Me TTS comes into its own, as you can set different hotkeys for different voices, and even languages. It can even auto-detect which language is to be read from. Better still, it's free to download, install and use.

T2S: Text to Voice is an Android app that uses Google's own text-to-speech software. You can open or import a text file to be read, and save the output as an MP3 file. It also has a feature called Type Speak, which will provide audio for text as you speak, which could be especially helpful for people with communication problems. It's free to use, but does contain ads.