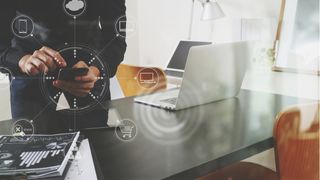 Dell has enjoyed a strong 2019 as the company's various businesses enjoyed a welcome boost after its decision to go public again paid off in a big way.

But far from being just a global behemoth, Dell is also focused on improving the fortunes of key markets, with the UK taking a leading role in its growth plans for 2020.

At the company's recent Dell Technologies Forum 2019 event in London, TechRadar Pro sat down with Claire Vyvyan, senior vice president UK and Ireland, to hear more about Dell's plans for the UK going into 2020.

However, tying down everything Dell can offer to companies of all sizes can be a challenge, with the company growing steadily to become one of the UK's largest tech employers.

“It's very hard because of the breadth and depth of what this company does both technically, and across all market segments from small to multinational from public to private...to share what we're really doing," Vyvyan says.

But she notes that getting the most out of the mountains of information being generated on a daily basis is paramount.

“You have to think about all the data in the world today - it's coming from thousands more sources than it used to come from," she notes, "almost everything's got some kind of embedded intelligence in it...so the question is, how do you harness that data and make your life better?”

Dell is better positioned than most other companies to enable this, with the company's stack ranging from security to cloud to heavy compute, making it an ideal partner for companies of all sizes looking to embark on a digital transformation journey.

“We create fantastic infrastructure that suit that's really reliable and agile that people can layer that software on," Vyvyan says, “but if you've got all that data sitting on your platforms, whether on prem, edge, or cloud, you actually want to help people use the data rather than just have it sitting there.”

“For years, people have bought off-the-shelf software, now we're starting to see people develop their own ideas and their own software to harness that data to start delivering unique experiences for their customers.”

“Technology has to be a core part of what they do. It's not a back office function anymore."

Earlier this year, company CEO and founder Michael Dell had talked about "advancing humanity by unlocking the power of data", revealing the '2030 Progress Made Real' plan which aims to usher in a new decade of responsibility and innovation with moonshot goals intended to propel the company's social impact worldwide.

Vyvyan highlighted the work Dell is aiming to do in the UK, including "one for one" recycling schemes and the use of 50 percent recyclable materials when making new devices. But the company is also looking to make a stand in protecting its users from security threats, no matter the scale.

“We're very conscious because of what happens in the world, that the technology we make can be used for good or for bad. And so actually, we're working really hard to make suretechnology is used by the good guys, and we protect from the bad guys.”

“Whether it's climate change, whether it's inequality, whether it's trying to close the gap between the Western world - all of those problems have a technical solution."

With the UK's political future apparently settled, (at least for the immediate few months), Vyvyan is also expecting Dell to be at the forefront of innovation and business success in the country.

“I'd maybe have hazarded a guess that the UK market would have been stalled a bit, but actually, we haven't seen that at all," she says. "I would say we've seen as much inbound investment from European companies putting a footprint in the UK, as helping UK customers put a footprint into Europe.”

And Dell looks set to play a major role in helping maintain this strength going forward, with Vyvyan bullish about the future for the company in the UK.

"For the UK to survive as an economy, it has to embrace technology," she adds, "our job as the biggest provider in the UK means we have to play a part in helping customers large and small."