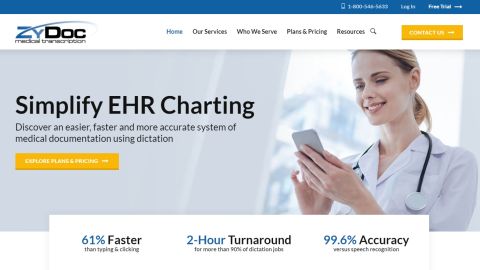 ZyDoc offers a wide choice of plans to suit a full variety of dictation needs.

ZyDoc Medical Transcription is a company founded in 1993 with the goal to “Increase the efficiency of physicians through the use of technology and services,” with its headquarters in Islandia, NY. It was founded by James Maisel, MD, an ophthalmologist, who remains as the Chairman and CEO. ZyDoc also produced one of the first multimedia EMR’s, and this prototype was subsequently purchased by the US Department of Defense.

A cornerstone function for ZyDoc is dictation, with the goal of transcribing clinical documentation generated by physicians. As the average dictation rate for a clinician, as stated by ZyDoc, is 100 words per minute, and few physicians can type that quickly, it is more efficient to dictate than type when it comes to clinical documentation- a 61% increase in speed according to ZyDoc.

Another important consideration for dictation is the accuracy. ZyDoc excels here, as each file goes through a two step process, the first being the transcription, and the second is editing. Of importance is that each is done by a separate professional, and all the editors are US based, which is why they can boast such a high accuracy rate that starts at 98% on the lowest tier. The other crucial distinction is that this is done by real live people (specialty specific medical transcriptionists), with a “Closed-Loop Feedback and Quality Assurance Process,” and not just the computer voice recognition that some services substitute to save money. This is how ‘Filler words,’ such as “Um,” are easily removed along the way, and do not make it into the transcribed document.

Another benefit is the choice of dictation methods that can be used. ZyDoc offers a toll free number, the option to use a handheld digital voice recorder with their included submission software, or a smartphone dictation app that is available for both iOS and Android mobile platforms.

The entire process is HIPAA compliant. This includes that files are encrypted to 128-bits, and audio files and transcribed documents are stored at a secure online data center.

User reviews are generally favorable of the ZyDoc Medical Transcription Service, however there are a few criticisms. One of these is that the ZyDoc server can be busy and overloaded at times, and there is a delay in the uploading of documents. Another issue is that an office requested some type of notification, such as an email, for when a dictation is completed, rather than having to login and chase down that piece of information. A third complaint is that when office staff gets interrupted when using ZyDoc, a common situation in a busy office where multitasking is quite prevalent, that when they get logged out, they lose their place on what they were doing, such as downloading the completed dictations.

ZyDoc provides support via a choice of telephone or email, on a 24/7/365 basis.

Unlike many competitors that provide no pricing info, ZyDoc eagerly shares this information, and offers a great choice among four tiers of plans.

At the lowest rung is SpeechDoc Basic, which offers a 98% accuracy rate, with a 24 hour turnaround time for dictations under 15 minutes, and is fully HIPAA compliant. The typists are located offshore, with their editors US based, and the latter are also background checked. There is a single letterhead included, and up to four templates can be used. The cost is a straightforward $0.10 (£0.078) per line, although there are additional surcharges of a reasonable $0.10 (£0.078) per page to fax documents, and an annoying $0.10 (£0.078) per minute to use their toll free number for dictations. There is also a surcharge for STAT dictations of a 100% additional fee.

The next higher up plan is SpeechDoc Standard, which upgrades to a 98.6% accuracy, with two letterheads, and up to 8 templates. A huge additional feature is the Automated EHR Section-Level Insertion to automatically get documents into your EMR, and this justifies the higher cost of $0.125 (£0.097) per line, with an additional benefit that the STAT dictation surcharge drops to 75% more.

Moving up to the next tier is SpeechDoc Professional, with the higher cost of $0.16 (£0.12) per line. This tier raises the guaranteed accuracy rate up to a lofty 99%, and a key benefit is that both the typists and the editor are both US based, and background checked. The turnaround time also drops to 12 hours, and the STAT surcharge also drops to 50% additional. The included letterheads increases to 4, the included templates rises to 12, and there are no surcharges for either toll free number dictations, nor faxing documents.

The top tier is SpeechDoc Enterprise, with a cost of $0.21 (£0.16) per line. This tier encompasses all the features of the lower plans with even more templates, and the highest accuracy of 99.6%. The key benefit is that there is no surcharge for STAT dictations, with a maximum turnaround time of under 4 hours.

There is also an available 14 day free trial.

Facilities in search of a medical transcription will find plenty to like about this service, including the choice of dictation devices, the multi-tiered plans, the professional transcriptionists, and the always available support. Be cognizant of the downsides of surcharges on lower plans including for using the toll free number, the offshore transcribing on lower plans, and the lack of notifications for completed documents. In the final analysis, ZyDoc is an affordable solution, and we appreciate the free trial to see how well it meets your needs.